I have followed the UE4 third person tutorial and have setup my character with a idle/walk and then shift to run animation. Now I have to add “Gun draw Animations” of which I have three: Draw, Aim, Shoot. No big deal, added them to the skeleton, there available in the Anim Blueprint.

Heres where it gets complicated, these animations should only be available when the character enters a “combat state”. In which she may either use ranged combat or transition to melee and vice versa.

Heres how far ive gotten as of now. I created a variable within the movement state called “isInCombat”. I added the three gun states and created the transitions between them using “IsInCombat” to initially transition to the gun draw. IE if she is in “combat state” she can draw her gun, aim, or shoot. I reversed that and used the not boolean to do the reverse transition so none can be played if she is not in combat. 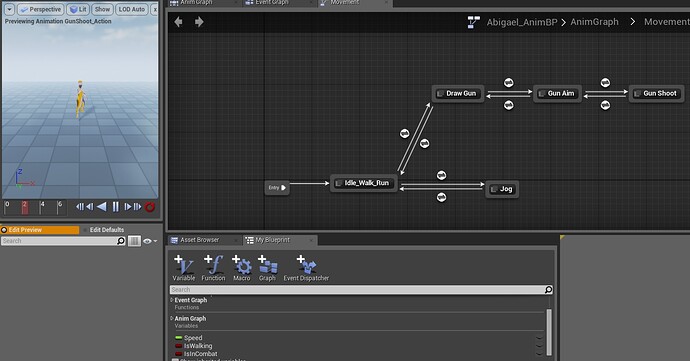 And to give a bit more context, when the player hits a trigger it goes into a “combat scenario”. At this point this is the only times where a player can draw their gun or engage in melee combat.

Here are my questions: is this the correct way to set up this sort of thing? How do I tell the anim blueprint to see if the character has hit that trigger or is in a “combat state”? Do I need to create a seperate level blueprint to setup the combat state?