Note: This bug was original posted in the UT forum. I was asked to report it in the engine forum (forwarding me here). I mostly kept the structure from that post and added repro steps.

AND and OR nodes in Blueprint behave differently to how C++ (or other common [script] language) works.

This is a valid if-condition (PlayerState won’t be accessed; no crash).

The Blueprint is trying to access the class field PlayerState of “NewVar_0” because it would process something like this (in C++):

Controller->PlayerState would result into a crash (null pointer) which is catched by the Blueprint VM and reported as an error. The and boolean node is using UKismetMathLibrary::BooleanAND(bool, bool) which takes two evaluated boolean values. This is likely the source of the problem.

The OR node behaves the same.

GetController would only be called if the Controller variable is not already set.

For Blueprint test, I created two pure functions which both calling a unique message and return true.

Func2 is also processed even if there is no need for it. In C++ it would only process Func1 as it already returns true (true || ? == true).

A workaround for the AND node would be using separate Branch nodes sequentially. This is not ideal for more than 2 expressions (and you have to process/link each false case).

Original post in the UT forum:
[AND and OR nodes’ connections are always evaluated (no associativity)][5]

Detailed description of the issue:
The associativity of the Blueprint nodes AND, OR, … are not the same like these from C++ (and other common languages). Each connected statement/node will be evaluated.

I was able to reproduce the behavior you mentioned and have entered a bug report (UE-22021) for investigation.

Getting modulo by zero log spam even when checking for a positive number due to this. Will this be addressed in the near future? Branches aren’t a reasonable solution to this.

Currently our resources are dedicated elsewhere and UE-22021 is not a priority item for us to work on. We don’t have a timeframe for when this may be addressed. Please keep in mind that with source code access, a programmer on your project can implement your own solution, and you are welcome to share that result with Epic for possible integration.

I haven’t had the opportunity to test the generation of C++ from blueprint, and I’ll probably never have time. Do you know if the C++ generated from the blueprint takes into account that all AND paths must be run?

Just thought I’d add here that you might want to look at using validated get functions as well (Right click variable), as they can sometimes be much cleaner. Obviously doesn’t help with the actual bug issue at hand. 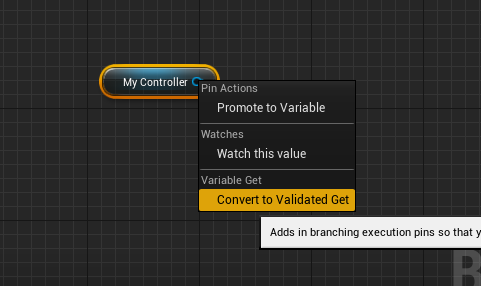 Are you referring to nativizing the blueprint? As RattleSN4K3 mentioned, the blueprint node uses UKismetMathLibrary::BooleanAND() and this is how it appears in the nativized asset as well; so this behavior would also exist with nativized blueprints.

Thanks for clearing that up Doug. I just didn’t know enough about the conversion process. Now I do.