Am I ghostbanned from the forum?
I got not a single reply to like past 15 questions I asked.
Or am I just the smartest person in the world and if I don’t know something then nobody does?

Edit: I am asking cause I don’t want to waste my time. I actualy figure answers to my questions by myslef quite often and I just don’t wanna spend time writing a post here if it doesn’t even show up.

Huh? Who said that?

I’ve noticed your posts but I haven’t had any immediate thoughts to contribute - I’m guessing others are the same… Sometimes when it’s quite, wait a while and try again.

Im not getting answers to problems that I have seen asked before (and someone should know the answer by now, or Epic should have fixed it?).
And no answers for if anyone or Epic can compile for [the community], free assets that were for UE4.26, but not UE4.27.
So I know how you feel, and idk if less pros visit UE forums anymore?? It’s very weird but frustrating.

Also if youre answering questions, I find that helpful (thank you), esp when you give pictures and steps.
I’ve been doing the same when I find out something - I give directions and pictures, as tho Im teaching someone new to UE - because I know how it feels when someone says do X, but idk where to go to do X in the Editor.

Am I ghostbanned from the forum?

Huh? What? Who said that!? show yourself!

Am I ghostbanned from the forum? … I got not a single reply to like past 15 questions I asked… Or am I just the smartest person in the world and if I don’t know something then nobody does?

…I know how you feel, and idk if less pros visit UE forums anymore?? It’s very weird but frustrating.

really frustrating that no one here in this forum is able to give any genuine indication or resolution on this question… Pretty disappointing to be honest mate… could it be that no developer really knows?? I honestly doubt that…

Epic’s contempt for users or indifference to this channel since around 2017, means that few devs who know anything frequent these forums anymore. Does that seem wrong? You decide:

Can we go back to the old forums? Off-Topic

+1… Big fan of the engine (3 versions now). Big fan of Sweeney and Epic’s legacy. But support is just awful on here. Most days its just us users talking to ourselves. On other days users are merely unpaid Epicsoft testers. For example, Forum bugs only get discovered because a few of us take the time to call Epic staff repeatedly to threads and give detailed repros like here. I’ve been highlighting bugs in the forums for over a year now (especially lost images). There’s still so many lost or bro…

Thanks for your post @AntiGravity . Can you explain what happened?

I was a forum member in the ancient days of UE1* and 2. I remember devs would post.

I left, then returned to UE in 2022.
All I know is that when I google search for answers, I get some results to the deactivated forums, pics or redirects dont work. It’s like a knowledge base has been wiped out or is outdated with engine changes.

Then there’s this forum, which seems like a ghost town? (Ive received some help to easy things, but it seems like there are less pros left.)

Lately I’ve been more active on the forums, replying / answering questions but I notice most other people answering are the same developers and most people questioning are beginners who (sometimes) just need to be pointed to the available documentation and tutorials out there. That and the horrific UX the forum website offers isn’t really a motivation for experienced devs to come here.

Looking at your last few posts, you put programming questions under Getting Started instead of Programming & Scripting, so you are likely missing a lot of eyes that can help.

Can you explain what happened?

2014-2016 Epic needed the Community to help stabilize UE4 which was very buggy at the time. So in short, this turned out to be a rich time for interaction between Epic devs and Indies. It shows in the quality of the threads / posts and replies. Even Tim Sweeney used to post on here regularly. If Elon Musk manages to tank Twitter, he may be forced to return who knows.

2017-2021 Epic started to cut ties with the Community starting with the exit of legendary Community Manager Alex Paschall. Epic basically decided that they no longer needed the Community’s help or input anymore or feedback in any way (too busy printing money like a central bank off the back of Fortnite worker crunch). So basically it was the end of any meaningful interaction between Indies and Epic reps from Epic Developers to Community Managers. Epic also planted the seeds for the destruction of the much loved Wiki (clumsily broke all the links too). Epic then started to force users to use a separate external non-forum based Bug-Submission-Form which itself was incredibly buggy (a bit like the forums atm). In short, it failed for lots of users and so lots gave up. The BSF also only provides one-way communication. Users send in bug reports but get little or no feedback back. Epic also started to hide feature requests around then too, and basically stopped responding to most feedback about the engine or the docs (depending on who you ask both have either improved greatly or haven’t at all).

2022 - Present… Epic onboard paid Moderators. But they contribute very little technically, which doesn’t help obviously (instead they hide out in work-in-progress). But that’s hardly what the Community asked for in Hourences 2021 survey threads. Most Pro-Devs saw the writing on the wall long before this, possibly as far back as 2016 and simply left. That meant that few highly-experienced or senior devs were around to reply to any threads anymore. And that caused a cascading effect, where any remaining intermediate devs also quickly abandoned the forums. Those that stayed appear to post a lot less anyway. Then there’s the new look forums (Discurse). If that was meant to reboot the forums and motivate senior devs to return, its not obvious that it has worked. Overall, its pretty clear that someone at Epic in middle-management or above, feels they can just let the Community die or leave it to feed off the remaining rotting corpses and that’s ok with everybody. Epic staff even feel its ok to ignore show stopping bugs such as D3D-Device-Lost which deserves a more serious response arguably. But fundamentally Epic execs don’t care. The forums are now entirely expendable. If they shut down tomorrow who’d care.

4 Likes
I'm running UE5 on Windows 10. Should I upgrade to Windows 11?!
UMG vs Slate vs Canvas
Can we go back to the old forums?
Notes - how do they work?
Terrible job on the new forum
What to do about dead threads?
What is the point of Unreal Roadmap?
TheArchlich May 1, 2022, 5:32am #10

Thank you for your replys, everyone!
Now at least I know they are visible!

Am I ghostbanned from the forum?
I got not a single reply to like past 15 questions I asked.

No, it’s just the poor design of the new forum. Previously, the forum landing page was the typical discourse one, where people could see the recent posts and the categories at the same time: 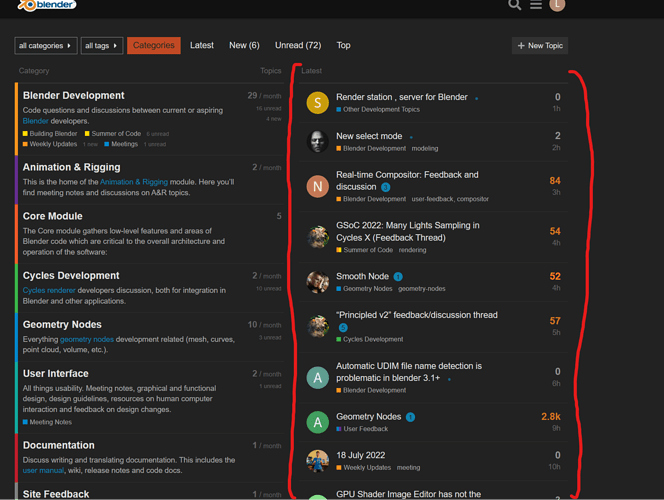 image1668×1255 337 KB
It’s this page, with the categories on the left and recent posts/topics on the right, which works as an extreme multiplier of community engagement. The combination of seeing the recent posts, topics and avatars of the forum users familiar to you is what creates most of the user engagement on discourse based forum.

With the recent Epic community hub, which merged in a crippled version of the discourse, this has been destroyed, so it’s quite natural the community engagement will drop to a fraction of what it was.

There will be much, much less answered new threads, because people will miss majority of them.