Hi everyone!
I decided to post this, first because I need some guidance, but also, because someone else, newbie like me, could find it usefull.

So, long story. I’m still learning unreal, I’m pretty new on it. About 2 months ago I started looking and discovering ALS( Advanced Locomotion System v4 ) trying to learn about how complex animation systems are done.
At some point, I decided to start customizing it, and one of the first things I started trying to change was the rifle aiming pose and add a new rifle firing animation. I’m a fan of Blender but not an expert, so I started looking on how to rig the mannequin skeleton and how to retarget existing animations to be able to adjust and fix them to my likely. - For that, I found some blender plugins, which I tried them all( I believe ), AutoRigPro, UEtoRigify, UE4Workspace, Rokoko Studio Live, MrMannequinTools and BoneBreaker. By using Blender 2.93 and 3.0alpha, the tools that better worked were UEtoRigify + Rokoko Live Studio retargeting tool. -

Note: I’m currently using UE5alpha2 and ALSv4 Community C++ version, but I tested all this also on UE4.26 and official ALSv4. 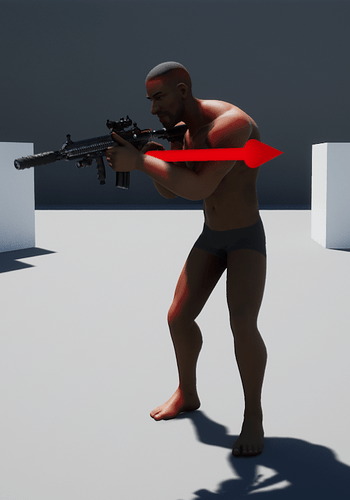 I added the red arrow as a child of the Held Object to view its orientation while changing the animation.

Since my first try after retargeting and modifying the pose, I ended up with this. 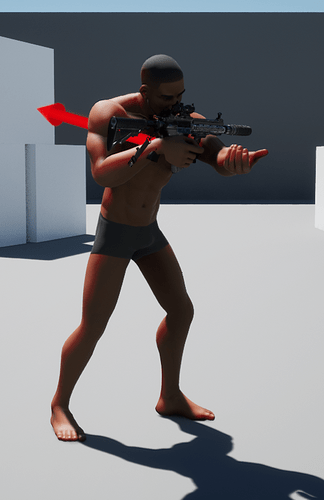 The weapon is the same, only the aiming pose was changed, while not aiming the weapon was correctly positioned in the hands. So, WTH, I started wondering what the hell is wrong…!? my animation is fine, the hands are positioned correctly, there are none twisted bones, only the weapon is being rotated!.. There has to be something with those VB bones or something, hand ik bones? maybe, but trying to look into the skeleton hierarchy in UE, VB bones are child of hand_l and hand_r…, and since there is no way to know the exact VB bones contraints( the bones that were selected when creating them ), I scratched my head for a very long time, literally, I firstly believed that something in my animation was wrong, I tried with all the Blender plugins, always with the same result. I even checked that the hand_ik bones were correctly constrained( some of the plugins doesn’t constrain the hand ik bones to hand_l and hand_r ). 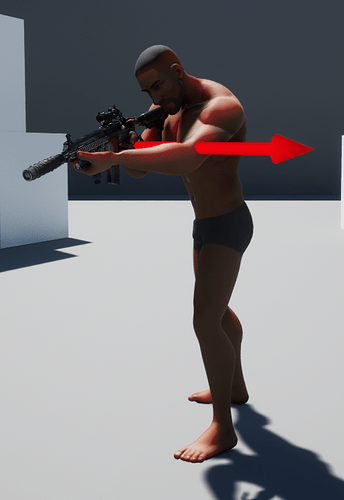 So, probably a lot of you that already knew that, or have more experience than me and probably were thinking - “but, but, but…, the ik bones…, noob…”, you are right, I’m noob. And to the one who is thinking on comment that I should had looked the web for a tutorial, documentation, etc…, I did, everywhere, UE forums, UE docs, reddit, youtube( all by searching on google of course ), and I didn’t found anything specific about how to CREATE new weapon animations for ALS. Most turorials shows how to add new animations, but none of them tells you “if you are creating your own animation, rotate the f*cking hand_gun_ik bone”

Since I wasn’t able to find anyone talking about how to handle hand ik bones when creating animations, or how to use them, or any kind of documentation about them… the only reference I found was one person saying “Hand IK bones were added by Epic for Paragon characters, they are there for you to use if you find them usefull”

Since most UE Mannequin rigging tools constrain the hand ik bones to hand_r and hand_l, and they do not expose any control to animate them, should I modify all the Rifle/Gun animations to follow the “standard” or should I find a way to modify the rig in order to be able to animate the hand_gun_ik bone?
Thoughts? Insights?

I hope someone finds this helpfull, or funny

For sure, was banging my head how to get the gun pointing properly. Unfortunately I bought the survival girl off the market, so i have other issues as well after retargeting the anims, she is slightly smaller than the ALS character causing some finger stretching and placement off a bit which will take more more to resolve. So buying market content does not guarantee they work with other content.

Oh yeah this is a huge pain to get ALS working correctly with it’s IK systems (feet and hands). Sadly there isn’t any documentation…

I would very interested. I am using a Paragon Character and the aiming pose is pretty messy, found a few janky methods to disguise it a bit, but would love to sort it out properly ;D

I might start recording the first videos about how the tooling works at the beginning of the next week.

From today I will publish everyday at 12:00 CET a new video about my ALS secrets - UE5 Manny integration automatization. Even if you don’t ALS IT might be a valuable series for you as we will develop some custom tools that will make it easier to move things from one character to another character within Unreal Engine. 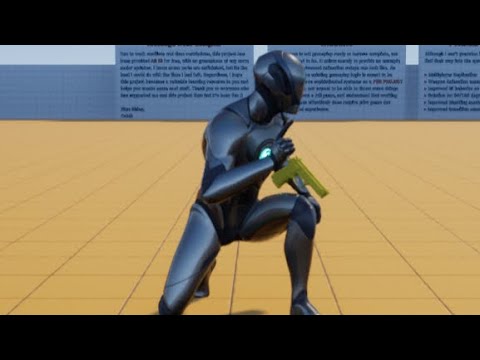 Most parts are now uploaded. Here is the play list that I created for the community.