The last few weeks I was busy working with the procedural generation of a planet (which consists *mostly *of hexagon tiles - more on that in a sec)!
I have seen a lot of map generators that inspired me (for example Zeustiak’s Map Generator). Nevertheless I wanted to work on a generator that created planets instead of 2D maps.
Any comments, ideas or answers to my several problems would be vastly appreciated.

Here is where I am now (this is biome view btw. I have a temperature, elevation and humidity view too - you can also view the wind in the form of arrows) : 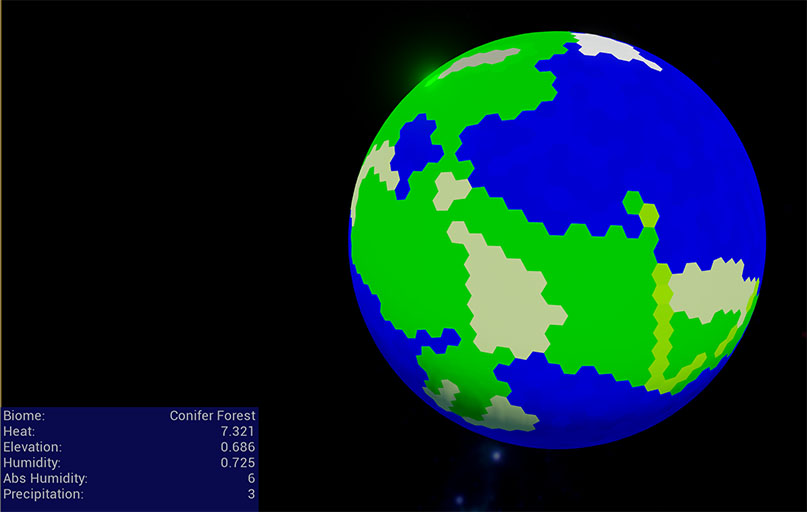 Another one with around 10k tiles: (Arrows are for winds) 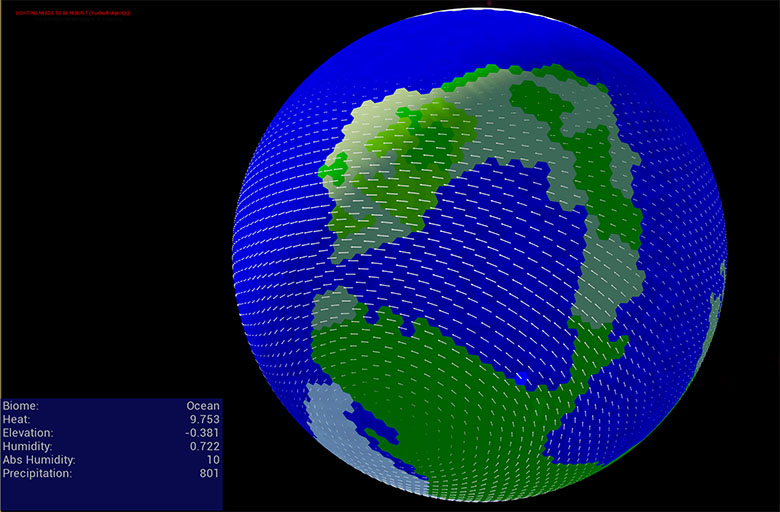 Summary:
A Planet Generation algorithm that begins by creating a procedural mesh, split into hundreds of tiles. Then **elevation **is calculated using tectonic plates - and continents are formed. **Heat **and **humidity **come next as well as some **wind **patterns. Finally using the previous calculations I assign **biomes **to titles.

Procedural Mesh Generation
This actually took most of my time. The first and simple idea was to start with a simple icosahedron and *subdivide *it as much as I had to, to create my initial sphere.
While at that time it looked like a simple idea I had no idea how to start creating my mesh. I went ahead and made a simple icosahedron using the custom mesh component by hard coding the vertex coordinates and the edges (that’s actually a valid way to create an icosahedron).
Nevertheless when I went ahead to split the edges I hit a wall. There was no obvious to me way to keep track of which edge I was splitting - and even when I found a solution to this I was always losing track of neighbor faces. The way I was representing my mesh was too simple to support any complex operations like subdivision. This got me reading a lot of papers on mesh representation (I was totally clueless before this) until I decided I was going with the half edge data structure also known as double connected edge list.
After coding the whole data structure and re-creating the icosahedron using it, I was able to proceed to subdividing it. By this time I had moved to using the Procedural Mesh Component.

The second part of the problem now, was to create hexagon tiles from this subdivided icosahedron. The idea again was simple: Treat each vertex as a *future *face (or tile), and the centroid of each neighboring triangle as the corner of those future faces: 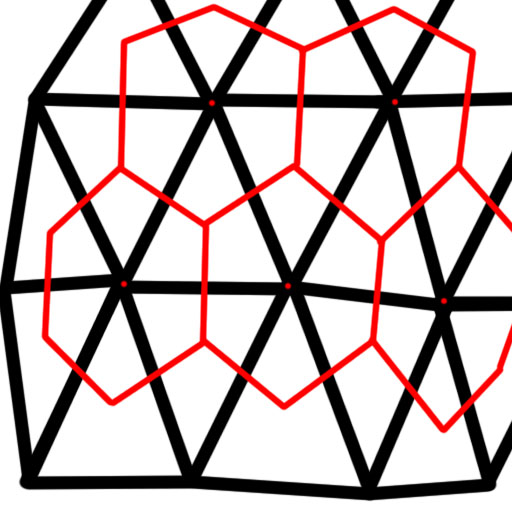 As you can understand, the black triangles are the old faces of the subdivided icosahedron and the red ones are the generated hexagon tiles. By the way this is called a dual polyhedron
Of course that wasn’t so easy as I hoped it to be, because I was losing neighboring tiles all the time. It wasn’t that hard either though.
The problem that arose was that you can NOT have a sphere out of hexagons - more about this here.
You **always **end up with pentagons in the places of the original icosahedron vertices. That was something I actually knew from the beginning - this irregularity is why I chose to start with a procedural mesh and not by slamming hexagons in an instanced mesh.
Anyway, the results were not bad at all:

(The screenshot was from when I was experimenting with materials, that’s why I had to paint it over with black lines, for you to see. The red are the pentagons)

The first part, the mesh, was done. I had some ideas to break the symmetry created by the pentagons by adding more pentagons in random locations. (Actually that idea was from a similar generator I had seen somewhere but can’t find anymore to link

I will follow right away with tectonics (elevation), temperatures, winds & more!

Next job was to create elevations and continents. A good way to do that is by using tectonic plates.

So I went ahead and created tectonic plates. I selected 50 random tiles (I called them tectonic roots) that were not too close to each other. Then I started assigning tiles to the closest tectonic roots.
The result was great right away:

Now I just had to assign a random vector to each tectonic plate that represented the movement around the center of the planet.

Then the hard part begun. I had to find all the tiles that are in the border of the tectonic plates and find the pressure they has from the neighbor tectonic plates.
I had to work on my math for this one since you need to find the cross product of the vector of the plates movement with the vector pointing to the neighbor tile. Do this for all the border tiles and then add up the values you found for the final pressure. (I won’t go into depth for now since I will have to refresh my memory on the math I did. If anyone is interested I can check it though)

After calculating the pressure on the borders I knew if the plates were colliding, drifting apart or if they were quite stable.
Then I created elevation in the borders: (~ref plate tectonics)

Finally I just had to move the elevation from the borders inwards to the tectonic root (Scaling down mountains or trenches). That took a recursive function but wasn’t that hard to do. I then blurred the elevations a bit to remove hard lines.
Anything with elevation < 0 became an ocean and elevation > 0 became land.

Here you can see a mountain range and what I think are results of my “Oceanic Trench” and “Island Arc” interpretations.

In any case I was happy with the morphology that was generated. Here’s another planet:

Post any questions below! I will continue with the wind and heat patterns tomorrow if you guys are interested!

I now had the elevation of my planets. It was time to create some kind of climate.
The correct way for this would be to generate heat (from the sun) and then spread it around with winds (winds that go from warm places to colder)
Unfortunately that wasn’t the first idea I had. What I did (and I plan on reworking) was to generate random winds.

The result was great from the beginning (one of the reasons I kept it). 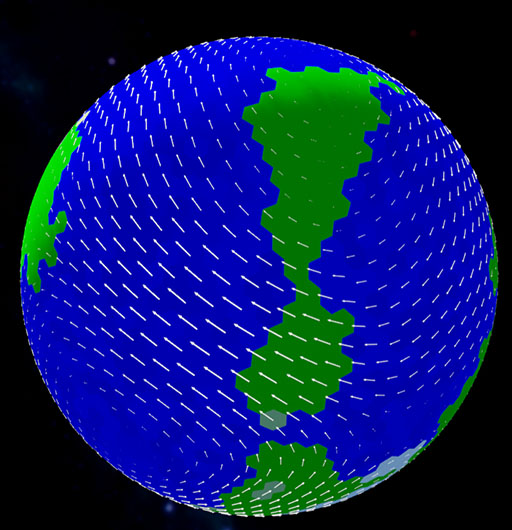 Then the temperature:
Things have started to be easier. I was now comfortable using the tiles I had made and assigning attributes to them. The temperature was calculated as such:
First of all I had two temperatures for each tile:

And a loop that was:

I run the previous loop until things settled down (or reached a very high loop counter): 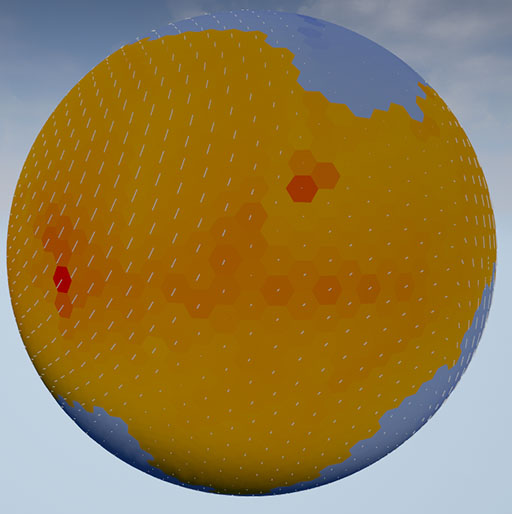 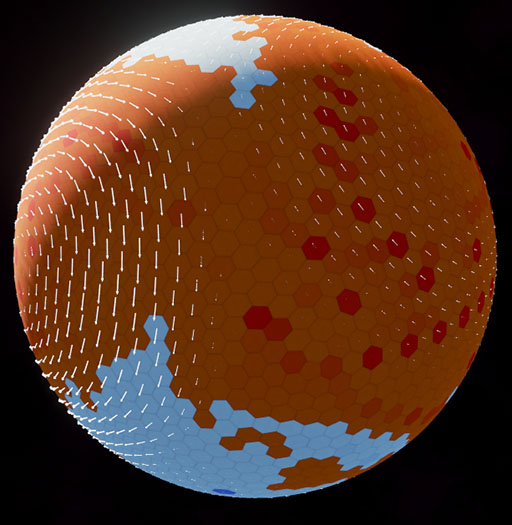 The problem I had with this implementation is that winds could easily overcome the starting heat received from the sun and huge subzero zones were created (instead of having sub-zero temperatures only in the poles, I had icy regions that reached even the equator).
For this reason I had to do a lot of tweaking and scale down a lot the heat transferred through winds.

Each tile has 3 variables:

So my algorithm went as follows:

I loop these steps 365 times to calculate the precipitation in every tile. Relative humidity is quite unstable as you can guess - but precipitation is a value I can use later for biomes!

Good job getting the hexagonal subdivision going, I had a crack at that and it proved a bit too challenging for me

This is super interesting

Looks great!
Good job getting the hexagonal subdivision going, I had a crack at that and it proved a bit too challenging for me

Thanks a lot! Yeah the subdivision was quite hard. I only managed to do it when I fully implemented the half-edge data structure.

This is super interesting

I updated the post with winds, heat & humidity! Unfortunately I couldn’t find a screenshot with humidity - when I do I’ll post it!

This looks awesome, I’ve always wanted to do this myself, but never really had the time. How far do you reckon you’re going to take it?

This looks awesome, I’ve always wanted to do this myself, but never really had the time. How far do you reckon you’re going to take it?

Not really sure, but at the moment I find it very interesting and I have some really nice ideas. At this moment I am experimenting with adding some ‘real time’ temperature and humidity changes. This way you can see temperatures change and ice melt in the duration of a year.

My main issue is that I don’t want to create a realistic simulation - but I want things to be based on reality.

For this reason I find hard to balance things (like winds) by keeping them realistic but still feel like a game.

Do you plan on selling this on the market place?

Do you plan on selling this on the market place?

My plans now are to make a game out of this. I have some great (imho) ideas on my mind. If that doesn’t work out for me there’s a good chance I’ll package it up and sell it in the marketplace. You think there will be many interested?

My plans now are to make a game out of this. I have some great (imho) ideas on my mind. If that doesn’t work out for me there’s a good chance I’ll package it up and sell it in the marketplace. You think there will be many interested?

Personally Speaking I know I am

Long delay but +1, has anything happened since?

Hey this is exactly what I’m looking for, I’d love to put this code to use. Do you mind posting it or ?

Also what I’m looking for. Wondering if it’s still ongoing in 2020.