All mobile games build in UE4.5 crash on my iphone4

Hallo!
I can deploy to my iphone 4 and play almost any mobile game in version 4.4.3, but can’t do same in 4.5. Any game crashes after launching, even Tappy

I’ve noticed that there were added new features and some additional postprocess settings in 4.5, I’ve completely turned them off in Rendering -> Default Postprocessing settings, unchecked “supports metal”, specified in Target Hardware -> Mobile/Tablet and Scaleable 3D or 2D. Then I deploy to device via Launch -> All_iOS_On_myPC, and it finishes with message “BUILD SUCCESSFUL” but there’re 3 same warnings appear in log saying: 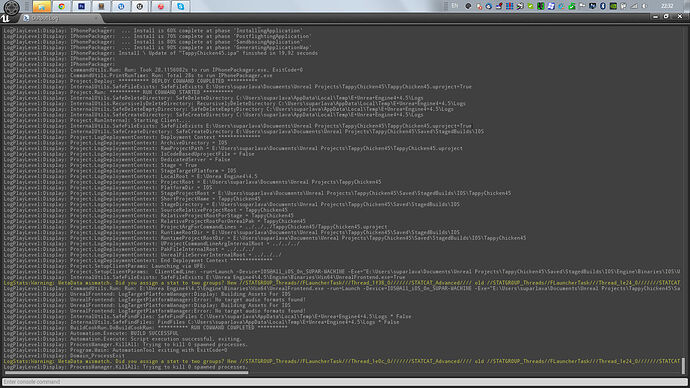 Application appears on iphone, if i launch game it’s loading ~25 seconds and crashes.
Does anybody have any suggestions? Maybe I missed something ?
As i said before, UE4.4.3 deploys same projects without any warnings and they run on this iphone just fine.
Maybe someone can understand and explain to me meaning of those warnings in log?

Do you mind opening an AnswerHub ticket for this? We can follow up there and give you more guidance. Thanks!