AI.Survivor. Round based survival FPS

So I started a game in Blender Game Engine that is a round based FPS game where you have to survive endless rounds of attacking AI.

I’ve since started migrating over to UE4 and it has now become a ship FPS inspired by the ‘Descent’ game series.

You’ll earn points each round with which you can then spend on defensive upgrades. Extra health, sentries etc. I’ve spent a couple of weeks on it and this is what I have so far. I plan to spend a while on this as I would like to eventually add it to my list of games for sale so I’ll probably spend the best part of the next year on it. We’ll see though!

I’m researching some art styles to give the game some guidance for level creation. I really like the dark/neon look. Super cool! I’d like to keep a consistent feel across the game, even with lighter maps. I’m thinking of going for a generally high contrast/‘fake’ look. I’m thinking of ‘Team fortress’/‘Fortnite’ kind of theme. That kind of half realistic , half cartoon look. Although not so easy to pull off, if I can this should look better than me trying to go for realistic.

If anybody could point me to any articles about going for that art style. At a quick glance, it looks to be detailed diffuse textures but with a stylised colour palette, without any normal maps etc. Nice lighting/shadowing/ambient etc. 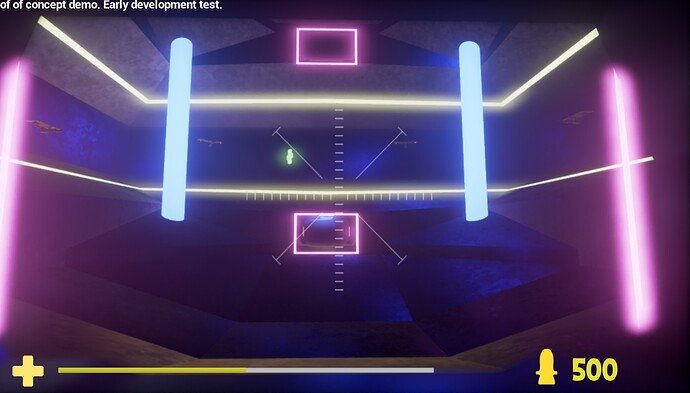