I am trying to use a simple Ai move to in order to get my enemy to move to my character when they hear or see them. The enemy 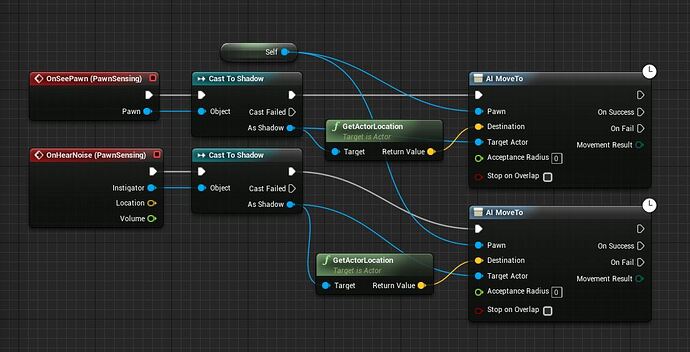 moves but is very slow and jitters between facing right and facing left. This is all being done in 2D.

I have attached my blueprint below!

From further research it appears that this issue was a bug and according to logs it was meant to be resolved in update 4.14. I am currently on engine 4.15 and have this issue!

What I think is happening in your case is that you’re calling the move to event more than once before it has a chance to finish, which is causing the stuttering to occur. If you place a print string after the Move To events, you’ll notice that they are being called more than once before the move is finished, at least if my theory is correct.

Let me know if this is not the case, and we can continue to investigate.

Hi, Sorry, it has taken me a while to get back to this.

This issue is caused when the Navmesh over my tile-map is too wide. I sized down the width and somehow that resolved my issue. When i size up the Navmesh again the issue comes back. I can still replicate this in Unreal Engine 4.15.1.

It is not being caused by the AI Move To event being called multiple times!

If you would like i will video this and link to the video?

Sure, you can link a video so I can take a look. However, if you’re altering the Nav Mesh settings and it’s causing odd behavior, it’s possible that it’s not a bug. If changing the settings will allow your AI Movement to work properly, it is likely that that is the intended workflow.