Been busy working on this 2D game for about a month in my spare time and it
is probably far enough to show.

There are currently two levels that are basically finished with just some widgets
and sound to add. I will add another two or three levels to complete the game.

Assets come from https://www.gameart2d.com/ and a few of the icons used from
https://www.kisspng.com/

RMB to fire gun when needed, A go left, D go right and Spacebar to jump.
Z will get her to slide only while running which I will use in one of the next levels.

Struggled with the jump and still not completely happy with it, cannot seem to
jump properly when going up on a platform. I am sure that this is some
setting, but I cannot find it.

Link to the game for Win 64 can be found here.

Please CTRL ALT DEL to exit at the moment. 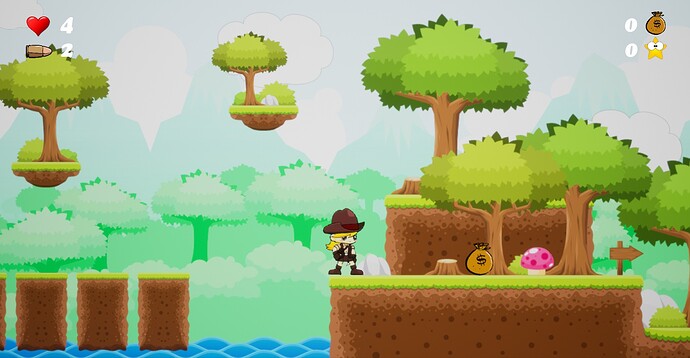 Updated link with sound completed in the 2 levels, so basically
done with them now.

Not bad! I like the visual style and it’s very colorful. The music is also very catchy and relaxing. I only managed to complete the first level, and about half of the second level. It’s challenging! Anyway, here’s my critiques:

Also, there were a few oddities:

I think you’ve got a pretty good foundation. I figure it just needs some extra polish. Other than that, keep up the good work!

Thanks so much for the in depth crit, really appreciate it!

Half the second level, so you missed the extra life mushroom at the end.

You mention it being challenging, my son also said so (he is 16). I suppose that
is then something I need to look at as I wanted to aim it at younger kids. I think
that maybe me going through the levels all the time I never picked this up, but
if more than one person is saying it I need to take note of it.

With the jump adjusted you get a bit higher on the jumps so the corners don’t really
affect you anymore. This is tricky as I have all the platform sprites set to shrinkwrap.
If you pull the collision back from the corners you sometimes seem to get hooked on
them and that is worse. I think the bouncing off the corners is probably the way I set it
up with your jump having to be timed perfectly when leaving one platform to go to the
next otherwise you sort of miss and bounce off, I had already adjusted quite a few of
them in X so the jumps are a bit more forgiving. This is something else that my son
complained about.

1.1 Have not used headphones while playing so will check this out, it should not be
this way.

1.2 Have not noticed a frame rate drop when playing, will also check on another machine.
Would be good to know if others also have a go and report the same thing.

No problem! For the hit detection, I noticed it most with the vertical moving cacti and the mushrooms. And with the mushrooms, if you jump at the edge of it, you’ll both kill it and die yourself.

As for the headphones thing, could it be that the music isn’t set to play as a 2D sound? If I had to guess, it’s a sound object being played in the physical world itself.

@Krayfishkarl. Still not getting the issue with the cacti, but the mushrooms are now sorted, thanks for spotting!

Made a practice level before the game starts. This was a nice Idea you had.

Game can now be quit at any time and I also have the framerate running in game at the moment just to check.

As for the sound issue, was a setting that is now fixed.

Jump is still not to my liking, but have no more ideas on how to fix it. There is a setting in the character movement
called Impart Base Velocity X which I believe I need, but it does not seem to be adjustable and with it just on the
character does not behave as I want.

There are now quite a few sign boards throughout levels giving different warnings to player.

Managed to get another level done, (actually finding that I do not like doing the level design) enjoy the blueprint
part far more so the levels will be limited to 4. :o 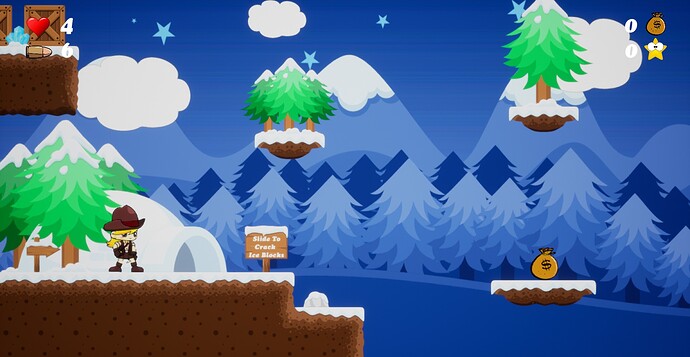 Game for Win 64 can be downloaded here.

Nice work! I haven’t had too much of a chance to try out everything in the new build because of my busy schedule, but I’m already liking the new changes.