New Game Mode and Game State Blueprints are:
Blueprint’/Game/PrimalEarth/CoreBlueprints/Sotf/Sotf_GameMode.Sotf_GameMode’ – inheriting from CustomGameMode for expanded functions!
Blueprint’/Game/PrimalEarth/CoreBlueprints/Sotf/Sotf_GameState.Sotf_GameState’ – inheriting from CustomGameState for expanded functions!
TestMapAreaSotF shows how it’s used in a small testmap, whereas TheIsland has Blueprint for all the level logic (Evo Events, etc).

Download stops all the time?
DSL 100.000 pls reupload to a better provide

I’m trying the download right now. If it fails i’ll ask the devs a new link

Could someone tell me what sort of things are inside? I want to know if I actually need them before downloading 30 gigs.

This may be in poor taste, but bump. I would really like to know what SoTF includes.

This may be in poor taste, but bump. I would really like to know what SoTF includes.

I haven’t checked these links but the first link they gave out a while ago included almost everything of SOTF. Most of it was done in blueprints which means you could reverse engineer the whole gamemode and learn a lot about ARK modding by that. You could find stuff like additional HUD widgets, gamerules, gameevents, ring of death, server restart logic, additional assets like the big *** building from the start of SOTF and so on. I guess the latest link is just an update of the last one.

I never cared much for SotF in the first place. That game mode sounded horrible and i never wanted to try it. But if it exposes more parameters for us to mod with, i hope devs will port that capability over to real mods as well.

I never cared much for SotF in the first place. That game mode sounded horrible and i never wanted to try it. But if it exposes more parameters for us to mod with, i hope devs will port that capability over to real mods as well.

It’s only added content, so no, it doesn’t expose any new parameters by itself. It might be useful for learning, as Kenturrac said, but I myself am mostly interested in assets that could be integrated into the main game (since I have 0 experience with models, meshes and the sort).

I actually downloaded it and had a look into it. Its basically just different content. I recommend making a backup of all of your editor files since the SOTF files will override quite a few of the existing files. It’s still the best example to learn from, but there is not much more in terms of art content.

If you have a slow download you can try to create a mirror on a VPS somewhere and potentially download it from there faster. If you keep trying the connection you might get a better one that goes faster.

SotF content updated with the latest! (has more logic in SotF GameState/GameMode for efficiently replicating the player list, etc)

SotF content updated with the latest! (has more logic in SotF GameState/GameMode for efficiently replicating the player list, etc)

Hey, I checked out your new SOTF files and found some issues you should know about.

The first one is about the gamemode. It seems like that you have more code functions exposed in your version of the ADK than we since these functions do not exist in our “CustomGameState.h” or are not exposed. Meaning that we have less functionality which limits the possibility of recreating something similar to SOTF. Gladly in this specific case these functions are not altered from code as it seems.

The second batch of unexposed functions can be found in the gamestate. Sadly in this case the function is very useful. Especially in the kind of TC I am working on. There is no access to it in our ADK. Would be lovely if you could expose them for us aswell.

The third one I found is about the very replication you talked about in your post. The function node “ForceReplicateNow” just doesn’t exist in our version of the ADK. I guess it’s not exposed aswell.

forcerepl.PNG1241×608 170 KB
And since we are talking about this function. Where is the difference to “ForceNetUpdate” since that seem to force replication aswell?

There might be more functions that are not exposed. Couldn’t check everything yet. It’s also quite hard to get an overview considering the crazy spaghetti state your blueprints are in. Hope your code is way cleaner.

Found another function in the SOTF files that is referenced there but not exposable in our kit. It’s located in the Sotf_GameState and is called “OnDrawExtraPlayerFloatingHUD”. It’s not really important for custom mods but still a short coming of our version of the ADK.

Btw: Since there was no reply yet. Can an Moderator pls point these issues to the Devs. It’s obviouly a bug and should get adressed.

The missing functions you describe don’t actually do anything and aren’t actually “existing” anywhere at the native C++ level – as you can see in the SotF classes, they’re empty and if you delete them you can not re-implement them. They are actually just regular unused non-native blueprint functions with a name – they’re unused vestiges of old thought processes that were never actually implemented at the native level. (They really should all be deleted as they are just useless non-native blueprint functions, you could add them manually as Function but they aren’t actually “triggered” by the native code). Anything you might want to do with them, is actually handled by other functions elsewhere in SotF. 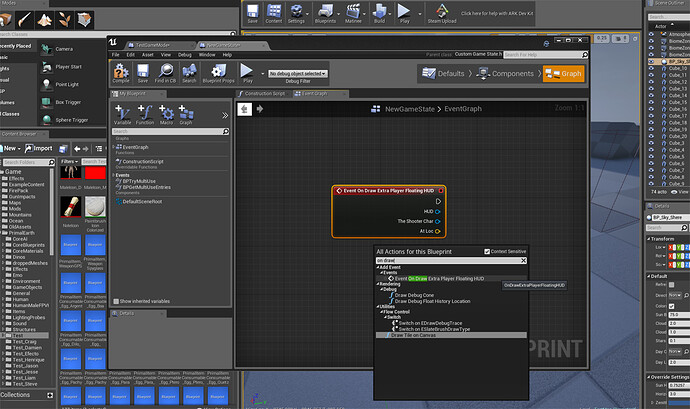 Regarding ForceReplicateNow(), it does indeed force the Actor to immediately replicate its state ‘inline’ when the function is called. We use this to immediately flush replication of the GameState to force all of the replicated SotF “BattleTribesData” Structure Array to be sent to the client whenever there is a change in the game’s Tribes’ state (such as player dying/leaving/joining). It is particularly useful to replicate properties that have “OnlyForceReplicate” flag set on such properties, as such properties will only replicate when ForeReplicateNow() is called – we set this property on the replicated Tribes arrays for performance reasons, because with 200+ players it was too inefficient for the server to try to replicate the large Tribe arrays all of the time, we needed such large data arrays to only replicate when we told them to using ForeReplicateNow()!

I hope that helps, keep up the great work on your TC!!!

Hey Drake,
thx for taking the time and explaining everything. I just tested what you decribed and you are right. I was looking for these events in the “overridable functions” instead of the event nodes. I could even find the “ForceReplicateNow” node now. Not sure if I was blind before…

And thx for the positive words. I need to stop working on the TC for a while until I finished moving from one country to another but after that I will return working on it twice as hard.