Adding "Torque" for object on the Y axis of the object NOT the world?

Hey! I’m relatively new and am having trouble with the axis used here.
Let me explain the scenario here briefly, I have a form of “plane” which when in the sky players can use the “Forward” input to have the plane rotate so the nose is facing upward slightly thus allowing it to go higher. I have everything working pretty much as I want it, however, only when facing straight ahead on the Y axis of the world.
Ex: Player is in the sky in direction of Y axis along the world, nose will point up. If player turns aircraft so they are facing the X axis it will make it so the side of the plane points upward (rather than the nose because the side is on the y axis of the world).
What I need is for the nose to always point up no matter where you are in the world.
How do I “Make Vector” following an objects axis not the worlds?

If this is hard to follow feel free to ask questions to help me resolve this issue id really appreciate it! =)

The picture basically shows how I am getting it to rotate which as I said basically works if it wasn’t for the vector not working on the axis of the pawn.
I tried a couple of things like multiplying the vectors return value by a “get forward vector” node of the pawn but to be honest I don’t really know what i’m doing. 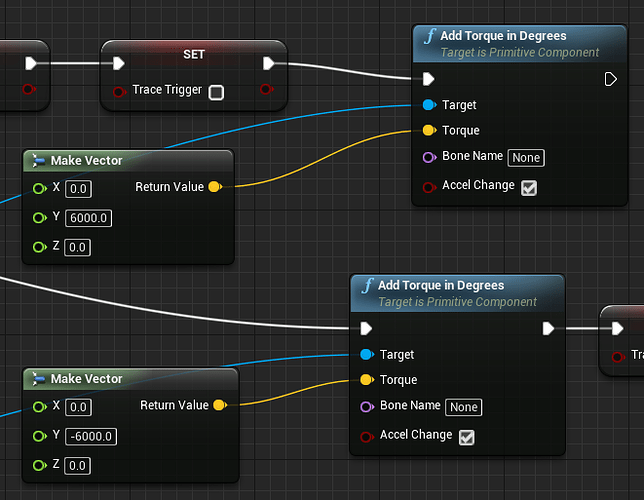 You could use the forward, right and up vectors of the actor instead of a set value.

Thanks to HarryHighDef for the answer!

WOW, that easy huh? That did exactly what I wanted thank you so much! Seems super obvious now, for whatever reason I kept trying to put things into the “Make Vector”.