I’m working on my first Unreal Engine project and was wondering if you could help me out. I’ve added flipbook animations for idle, walking and jumping but I’m having difficulty adding a flipbook animation for sprinting. I’ve starting adding it to the blueprint, which you can see on the image highlighted in yellow, but don’t know where or how to connect it to the rest of the animations. I want it so the animation will only change if the character is moving so the animation won’t play if the character is idle. I would really appreciate your help. I’ve checked online but have had no luck.

If I haven’t provided enough detail please let me know and I’ll try and explain it better, I’m a total Unreal noob at this point 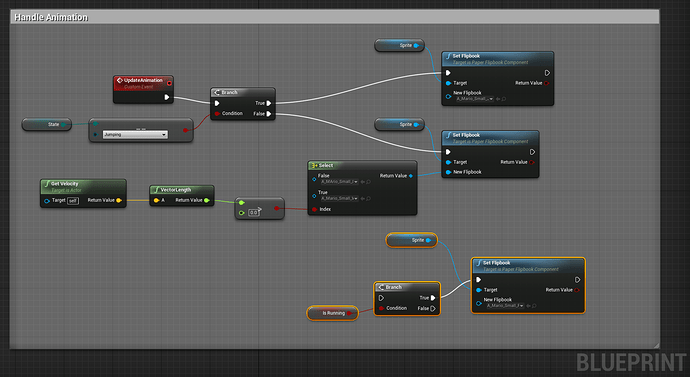 Hey RimmyD, thanks for helping out. That worked!

That was so simple I’m actually a little embarrassed in asking haha but thank you so much. I’m still new to this so will take some time getting the hang of it. I would say if you need any help yourself I’ll happily help but I’m sure it’ll take some time before I can offer my services. I’ll keep you in mind though for when I become a Jedi in the Unreal world. Happy coding my friend and thanks again!

In your idle/Walk Select Node’s True input (that’s a big bunch of words) you need to connect another Select node just like the one you have but check isSprinting.