How do we make sure the generated .po localization files have comments in them to give the translators hints when they get to translate them?

We have everything set up already, and have our .po/.manifest/.locres files generating and working in the game. We just need to add comments on some of the entries.

I’ve seen it mentioned on the web that adding a ‘///’ comment above the text to be localised in the code should add that as a comment in the generated .po file, but that doesn’t seem to be the case in Unreal.

It would be a massive pain to add the comments afterwards as that would mean doing it once for each locale. Does anyone know how we do this?

Right now the only “comments” provided to the translators through the .po files is the information we have at gather. This includes the namespace and key, which is great for source code extracted text but not useful for asset extracted as we don’t yet allow manual setting of these values, as well as the asset/property/source code file and line the text was gathered from.

We don’t currently support a “notes” or comment system within the the loc system unfortunately. You have a couple options.

Thanks for the info.

@Sarge Coming at you from the not-so-near future - any movement on comments? Seems like a pretty essential feature - ideally we’d just be able to type a localisation comment in on any text variable here 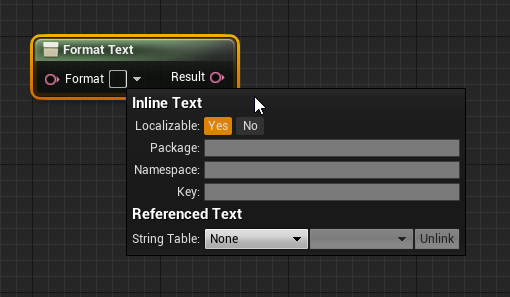