Addec Child Widget Does Not Appear in Scrollbox

I’m trying to create a server list in my game. All the networking stuff is set up in the Game Instance, per the official multiplayer tutorial, save for the user interfaces, which are all widget blueprints.

Basically, you push a button on the server menu, and this executes:

From which this should then execute:

However, when I run the game in the editor, it does not add these widgets to the scrollbox. I put that Print String at the end to confirm that it does execute, and it does, but the scrollbox remains empty.

I’ve put in Print Strings after each node in both of these Blueprints and they confirm all the nodes are executing. I’ve also printed the length of the array and tested it with multiple servers for it find, confirming that the array isn’t empty. I’ve looked around and answers here suggested removing the canvas panel from the child widget and adding a delay in before the ServerEntry widgets are created, and neither of those has worked. I’ve also tried swapping the Content and Target pins on the Add Child node, as the documentation has the element to be added as the Target and the Content as the widget to add it to, but these are reversed in the tutorial I followed. Neither work.

Maybe it has something to do with running these things from the Game Instance?

Here is a way huge picture of the ServerEntry Widget Blueprint in case that helps determine the problem: 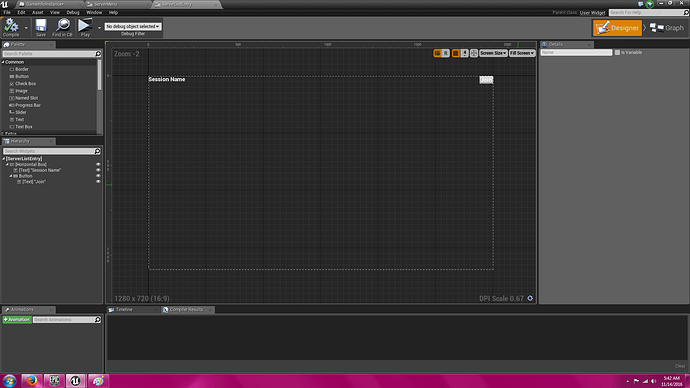 As well as the Server Menu Widget Blueprint. The highlighted Scrollbox is the element that I am trying to add the child widgets to. 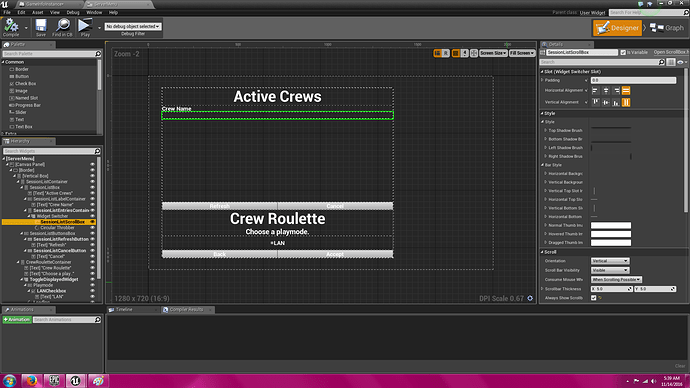 I’m still messing with it and I can add the ServerEntry Widget to the Viewport and it works as it’s supposed to, so I know it’s not the information isn’t populating.

It just will not add to the scrollbox. I’ve tried putting the CreateSessionEntries event in the Game Instance, in the Server Menu’s blueprint, and even tried making a player controller for it to use. None of them work.

Hello! I’ve got the same problem here. I know the topic is old, but, have you found the solution?

If you do this in Game instance you do not need to executes on Owning client.

Also, check if your variable “ServerMenuVB” have valid reference.

I suggest you to create widgets in your HUD class and get widget references from there.