Hi people, so I’ve set this ball with a simple sphere collision to bounce from the platform to the same height no matter what height it was dropped from. Except that I couldn’t fix some issues.

First, the Ball bounces off to variables heights even with no rotation applied to platform, it is only more much more noticeable when the platform is rotation.

Second, my Ball skyrockets when it hit’s a 90degree angle collision of the platform. I’ve tried replace the sphere collision with a boxed one but they behave the same either way.

I’ve set up a physics material for both the platform and the ball in which I disabled bounciness and any other force that may add up, this is a video that shows what I’m dealing with and thanks!

I’d try it like this since you actually want to override physics: 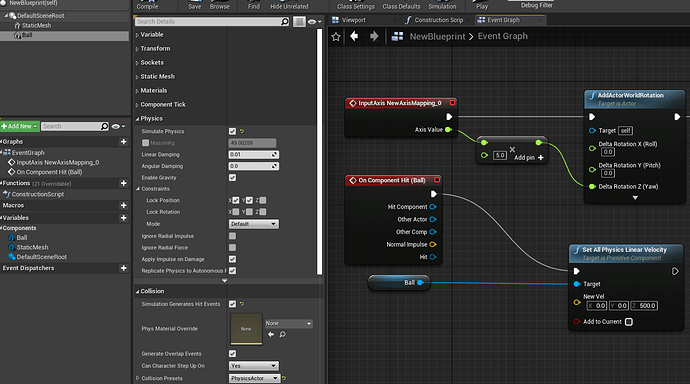 This does not require physical material. And hitting an edge matters little.

Thank you so much dude, you’ve just helped me solve a week long problem. Do you have any advice on how to learn more stuff about Unreal’s physics and world coordination in general ?

It’s getting replaced with a more intricate solution - Chaos. While the current system is usable, it is full of bugs that won’t be fixed; some are deal breakers, like material + destructible

If you can’t fix those yourself, you’re stuck.

It’s a weird transitional period for physics. Whatever you learn on the math / logic side of things will be applicable later on anyway. But I’d lean towards learning the new system even though it’s not ready for production yet:

I have tried the binary 4.26-Chaos build of the engine as well as a source build and in both instances Chaos is 22 times slower than physx for rigid body simulation. I came to this number by comparing the ms cost of physics during the exact same test in a 4.24 project, a 4.26-Chaos binary project, and a 4.26 source build with chaos added. The test consisted of 1600 chairs falling to the ground. I have no idea what I am doing wrong or it is normal for a high performance physics engine to be 22 …

I’d like to think there’s a lot being done under the hood to address the issue.

Thank you for your time, I’ve come across Chaos when I tried to create a destructible mesh instead of using Apex destruction. It is indeed something new for me as a beginner and somewhat unstable too, I’ll keep learning through trial and error and the help of this forum. I wanna move to UE5 'cause the user interface is much readable for me but I’ll wait till official release and hopefully Chaos would be polished by then.
Cheers !