Today out of nowhere my actor components where all buged, in one of my blueprints called BP_Hero. Their functions are not recognized and show up like this:

The Crashlog when I try adding one of the actor blueprints again: [link text][2]

I’m on a PC using the last version installed from the launcher, 4.7.3

I reverted BP_Hero blueprint (where I have the ActorComponents), and started adding the missing parts. I restarted the editor after each adition until I found what broke the blueprint in my case.

I have 5 event dispatchers in my GameMode blueprint, and if I bind an event to it in BP_Hero, close the project and open it again, the ActorBlueprints get buged.

This is the code: 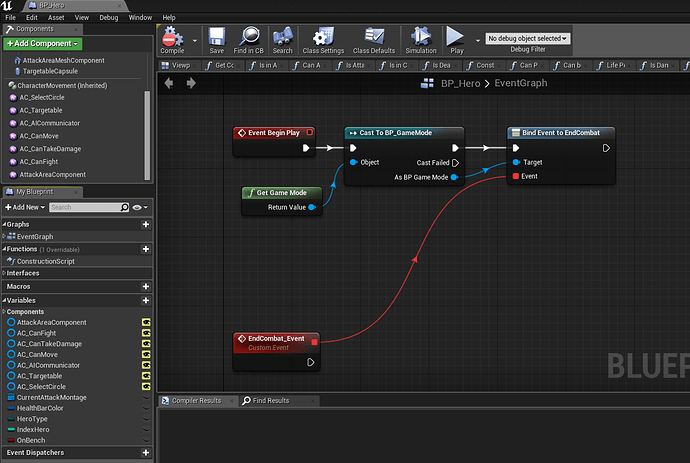 Note that the ActionComponents appear at the bottom left in the variables section outside of the components category.

I tried to reproduce this problem but failed =(
I have no idea what could be causing this, maybe a circular dependency problem?

Looking over the logs you submitted, it seems that you’re receiving a LogSlate:Warning which states that it failed to load font data, but it also states above that it failed to begin reading directory changes. Did you move any of your files around outside of the Editor? Or delete any of them?

Also, is this happening with any other project of yours that you’ve tried?

I haven’t worked on another project for a while. I have an old version of this project that I haven’t opened in more than a month, and the marketplace downloads. All were working well.

I haven’t moved or deleted files at all.

When I try to compile anything and it crashed, there is not even a crash log submit windows popping out.

I do get a crash submit window when I try to add a new ActorComponent to that same blueprint that from the Image I posted before. Here is the log for that: link text

I have been investigating this issue, along with emailing our developers back and forth. It seems that perhaps your assets may be problematic. I haven’t been able to reproduce this in-house, so I was wondering if you’d be able to either send the assets that you’re having trouble with to us, or provide us with the project you’re working out of.

Since projects typically have sensitive information in them, I would suggest uploading it to something like Google Drive and then sending me the link in a PM so I can download it and reroute it to our developers for additional review.

Hope to hear from you soon, thanks!

I wanted to let you know that since it’ll take 6 hours, I’ll be seeing it in the morning. Here is a link to my Forum profile, so you can easily find me.

Thank you so much for your patience, and for providing me with your project that you’re experiencing trouble with. I was unable to reproduce this on my machine however, I have submitted a bug to our blueprint developers for additional review. If you’d like to receive an update on this bug report, please refer to: UE-13196

I just received an email from one of our developers. Unfortunately, we have not been able to reproduce this issue on any of our builds or machines.

Anyway, my suggestion would be to make a copy of your project and try again in 4.7.4 before rebuilding the blueprint from scratch.

I did what I needed in another way (not using event dispatchers) that same day I uploaded the project, and had no problems after that. However I’m still using that blueprint. I’m gonna do a rollback to the version it crashed and test it with 4.7.4. If it does crash I might recreate the blueprint anyway just in case.

I’m glad you were able to work around the issue you were originally experiencing. Please let us know if you’re still running into the same issue, once you test it out.