Trying to make an actor with a static mesh you set dynamically. Just want the mesh to act under physics on play. Only components are a scene root and the mesh. Both set to moveable

I’m setting the static mesh as a variable and having construction script set the mesh. Simulate Physics and Enable Gravity are both ticked in the instance I drag in, but the actor just stays floating in space not moving.

Any help much appreciated.

I just started a new blank project, deleted everything but the floor in the starting level.
Then I created a new actor, added a static mesh (Shape_Plane).
In the event graph, I set this up: 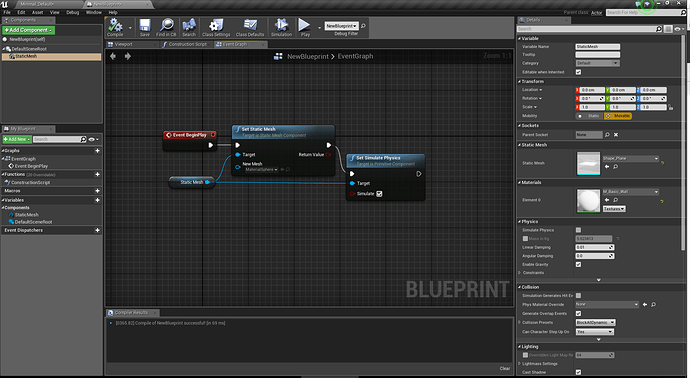 I left all the defaults for the static mesh alone, so “simulate physics” is off, “enable gravity” is on.

I’m not sure how your setup differs from this.

For what its worth I’m seeing the same problem in 4.10 w/o workaround. Versions above?
If the same series of meshes has physics enabled at design time then there’s no issue…
I’m doing this in a Get-All-Actors-Of-Class ForEachLoop, but otherwise the code is the same.

However, for whatever reason toggling physics doesn’t enable physics for all meshes, just some.
So I feel there’s a definite bug toggling simulate physics with blueprints anyway, C++???
Note, I’m also using matinee to move the meshes too, so other factors may be at play here.

Edit - So I rebuilt it but left the static mesh collision settings as standard and it worked. Must be something i’m doing in there. will investigate further.

Edit 2 - So, I didn’t have the object set to be a physics body. Had created a new collision channel which I’d set my objects to be. Guessing that’s a bit of a rule?

Thanks for taking the time to try it out folks

My implementation differs from Chumbles in that i’m defining the static mesh by using a variable exposed on an instance of this blueprint dragged in to the world rather than in the blueprint intself. Not sure if that would cause any difference but I wouldn’t have thought so.

In the blueprint itself the static mesh is empty, and is set to the chosen mesh in construction script so I can see it in editor.