I’ve been following the Twin Stick Shooter Tutorial, and at one point he adds a weapon node and links it to a Pull Trigger function. However, when I tried to do the exact same thing, I had to disable context sensitive to get the function to show up, and even when I did that and brought into the blueprint, I can’t link the weapon to the function because it says “Actor Reference is not compatible with Exec”. I assume the system works differently now? Can someone tell me how to complete the tutorial section in a way that will work? This is my first time touching this, so I don’t know enough to be able to figure out a workaround. Or maybe I’m doing something wrong? 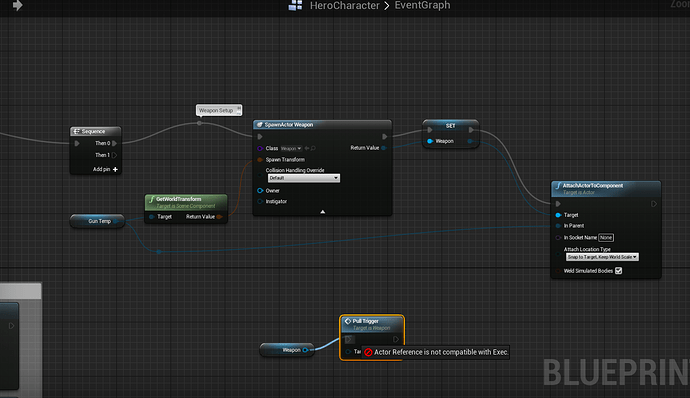 I am stuck here as well. Did you ever get a reply or figure it out?

If you look at his graph again, you’ll see that the “weapon” node should go into the target of the function, not the exec pin. There’s something wrong with your “weapon” variable, it shouldn’t just be a generic actor reference, it should be a weapon reference, as you can see when he selects the variable, in the details panel under “variable type” it says “weapon”. The Actor class doesn’t have that “pull trigger” function, so it won’t let you use it from an actor reference.

But it seems like you don’t understand some basics of how blueprints work. The Exec, or execution pin, is where you tell a function to run. It’s like the power cord to an appliance. Any other pins going into a function will generally be data, like numbers, vectors, or references to objects, but they won’t be used unless the function runs. Like how you can put bread into your toaster, but it’ll just sit there until you plug in the toaster and turn it on.