I’ve provided an image as it’s easier to see. I’m unsure why this doesn’t work? If I change the Action Mapping to an Axis Mapping it works. Just looking for the character to move forward, the rotation is correct it just appears to be an issue with the scale? Guessing I’m not understanding what the scale value is or how Action Mapping works? 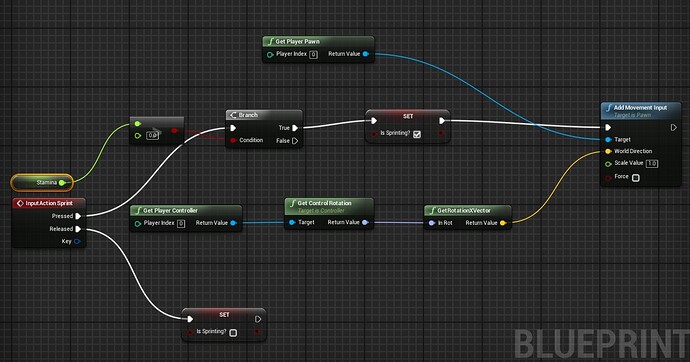 I guess I’ll just work with it as an Axis Mapping, but I mainly wanted to know why it doesn’t work like this? I’ve also tried making a float and setting that to 0 or 1 depending whether button pressed or not and then having Add Movement input pull the scale from that float. Didn’t work either.

The problem is that Action Mappings don’t have a continuous signal. They only send out a short pulse once you press the key, and then once you release. It’s not a problem with the scale; movement with Axis Mappings typically uses a range from -1 to 1. It’s just because you’re sending out a tiny little signal that barely lasts a second, so Add Movement Input is only called once every time you press the key. There are ways to fake “continuous” signals with Action Mappings, but you’re better off just using Axis Mappings.

I might be wrong, I’m not Epic staff, but I’m pretty sure that’s how Action Mappings work from my experience.

Yeah, that’s what I was thinking. But at the same time I thought you’d at least see the character jitter. But 1 tick is likely not visible haha.

Anyway I ended up uses axis, and then had a check in my event tick to set if character was running.

Thanks for the answer