Abysm of reality / Better Light Than Ever / UE5 Lighting Challenge

Abysm of reality / Better Light Than Ever / UE5 Lighting Challenge

The entire environment was made from scratch using several assets from Quixel Megascans such as:
-Limestone Quarry
-Sandstone
The candles are from the Goddes Temple project and I just placed them with Foliage tool and I tweaked the shader just a little.
The fog was made in two different ways, the first one is fully procedural with a material and the more realistic fog is made using the free 4k fog overlays by PremiumBeat.
Music and sound credits
-LJ Kruzer - Chantier Navals 412
-Zixem - Bee Cave Ambient 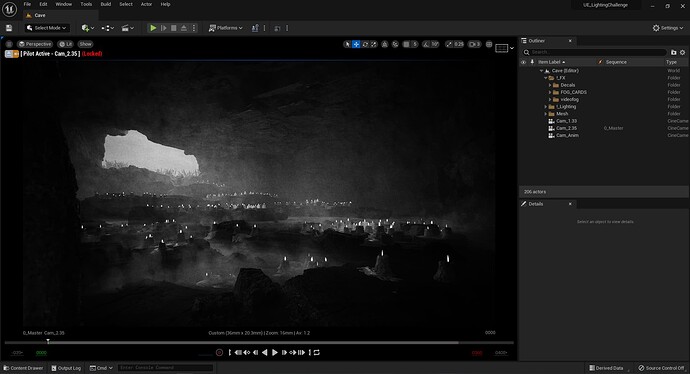 Imagine that we see in black and white, without distinguishing colors. The world is then presented to us as a play of intensities, like a painting in which light and shadow alternate.
I made this scene for the latest Epic challenge “Better Light Than Ever”.
I was heavily inspired by the mexican film “Macario” and the amazing photography work by Gabriel Figueroa, not only during this film but his overall career.
The whole video was encoded using the Command Line Encoder within the engine.