Abstraction of UPrimitiveComponent and ghost of components

I’ve got two components in my Actor:

In constructor, I’m initializing them:

Now creating blueprint basing on actor AShip. Adding it to level. Choosing it and in details I see transformation node. Saving level, closing UE4 Editor. Opening it, choosing created object in level and there is no transformation node in details anymore. I must destroy this object and create new one to make it appear.
But, If I create a derivied from UPrimitiveComponent class and will use it in AShip - then it’s fine.

What’s the catch ? Because of abstraction of UPrimitiveComponent? Can’t see any abstract function in it actually.

Hi, Tim.
Thanks for the answer.

I can reproduce the problem in another project. Some correction: after your first compiling of project (if object of your class already exists in scene), you should recompile shader, save it and restart the UE4. Right after that the problem will appear

This problem reproduces on another work station in company.

Is this the transformation node that is not visible to you? 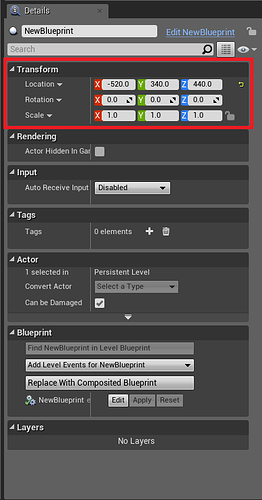 Have you reproduced problem?

I did notice some unusual behavior where the Blueprint that I had placed in the level would sometimes have its position reset to the world origin (0, 0, 0) when I reopened the project. I always had the Transform section visible, though.

I just realized that this post has been sitting for a while. Is this issue still being problematic for you?

We have not heard from you for a little while. I have still not been able to reproduce the issue you described. Is it still causing problems for you? If you can reproduce the issue in a new project and upload the project, I would be happy to take a look at that to see if I can determine what is happening. I will mark this as resolved for now, but please feel free to re-open this issue at any time if you need any additional help.