About "Releasing Your Project"

Hello, I want to talk about this

Creating a release versioned project with cooked content for distribution.

Before I used package File > Package Project > Windows > Windows (64-bit), which keep saves at Local AppData, but package from this documantation creates save files in the game folder, what is really strange, and I dont see any setting to change it.

Before I used package File > Package Project > Windows > Windows (64-bit), which keep saves at Local AppData, but package from this documantation creates save files in the game folder, what is really strange, and I dont see any setting to change it.

That sounds like you are packaging for development. Did you definitely configure ‘shipping’?

For the second part, I just checked my release, it is in the 1.0 folder. Did you set the version number in the config?

In the end, it doesn’t really matter that much where it puts the PAK file and EXE as long as you know where it is. You only have to really get it working like it says in the examples if you want to use the Epic patching system ( I seem to recall ). I used to platform specific update mechanism ( in my case, Steam ).

The shipping build option is near the start: 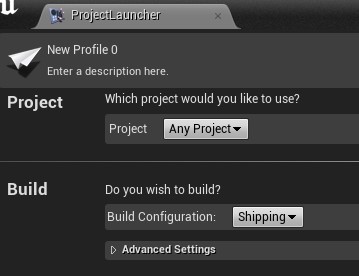 I’m not sure about where ti “Enter a version number for this release.”, this documentation need more pictures

But yes, looks like this packing for development, because I can see Print String text. But why? Also documentation didnt say anything about “Is this build for distribution to the public”.

Oooooooooh, so there check box near Build which I missed

So “Did you set the version number in the config?” I set this right?

The version number only matters if you’re trying to use Epic’s system to manage patches. Then, further down, you can say you’re shipping a patch.

Did you only select the maps you want to package? 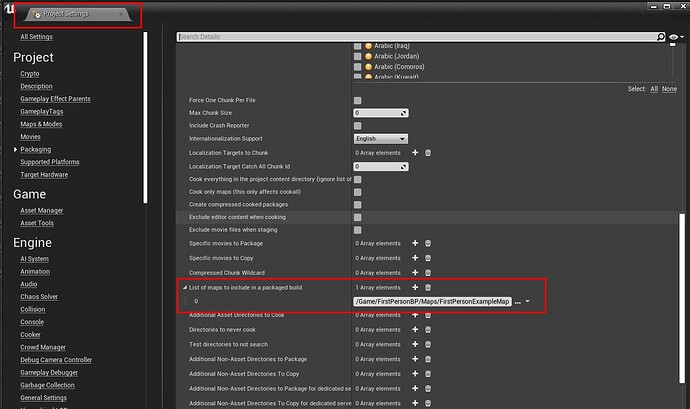 Otherwise, it will package the whole project.

But I still dont have 1.0 folder, and I have strange lines in ProjectLauncherLog like:
LogInit: Display: LogUObjectGlobals: Warning: Failed to find object 'Class/Game/FirstPersonBP/FirstPersonOverview.FirstPersonOverview_C’
But I started from puzzle starter project

I selected all maps in ProjectLauncher, in Project Settings this line have 0 elements. But is there any difference between packaging with custom launch profile, or with File > Package Project? Looks like that there same settings.

Hmmm, but I have all maps packaged with both ways while this array is empty, so what for I need to put maps in it?

It’s confusing, I know. I think it’s all part of the same thing. You need to put the maps in the array.

It tells the system what NOT to package ( by implication ). I think your problem with broken references may be because you’re packaging everything…

You’re welcome. Sorry I don’t have an overall answer

As long as you end up with the PAK and EXE, that’s the main thing.

But in ProjectLauncher I selecting maps with check boxes, and there no FirstPerson map. This error have yellow color and looks like as strange bug, as I said I started from puzzle map.

So how many times I need to say thanks?

So thanks for the answers, dont miss my new questions, if they will appear

Convert something into answer, if you want, so I can select it as answer.