On mobile(any ios version on all ios devices,even on metal),everytime I use SpawnActorFromClass to spawn a BP class or use a SpawnEmitterAtLocation to spawn particles during runtime on mobile, the game will get stuck for a second or more to render(at first time),this really influences experience,and this never happens on my PC…Even very simple BP or particle will happen that hitches…I have found no solution right now…
I found that in UE4 roadmap,there’s a new card like screenshot below maybe have something to do with it,but it still in wishlist…
And I remember that the Zen Garden created by UE4 running on metal ios8 doesn’t have this issue,I know it must have used the dynamic spawn method,but never get stuck on ios during runtime,how is it optimized?
Could you please help me how to solve that issue on mobile,since that it is a really really big problem…Thanks a lot! 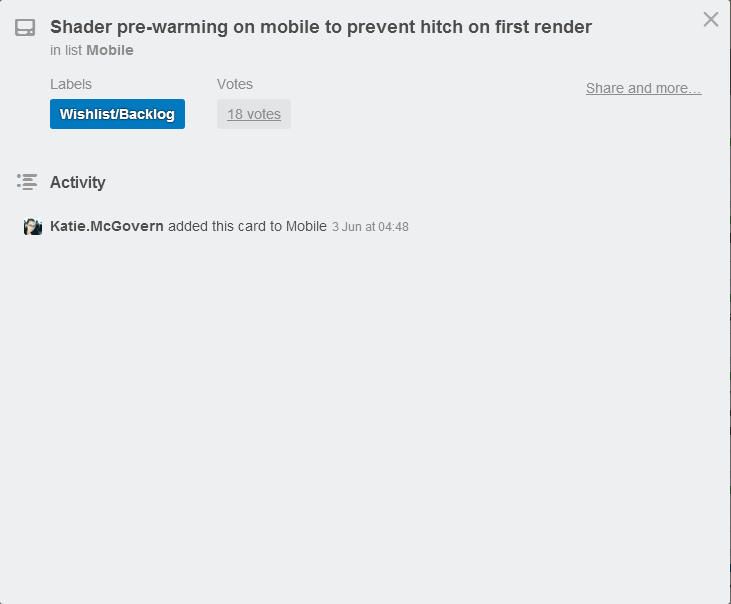 I think this concerns the problem you are having.

“If you cook with Windows, the shaders will not be precompiled because there is no shader compiler program for Windows. It will compile the shaders at runtime if this is the case (it uses the offline/online flag for looking up the shader in the DerivedDataCache, so both modes live together correctly).”

Thanks very much.Maybe that concerns a lot.But is there a way to prevent this using Metal?The document doesn’t cover that.

I think you have to have a mac to precompile the shaders with xcode. I have this problem too but I haven’t gotten to the point of using a mac yet.

I’m on a mac now and still have the same problem so I’m not sure what that metal rendering link that I posted is referring to. I’ll probably submit a question my self if no one else responds to this.