Hi I’m new to UE/ARK modding, this is my first mod and have watched probably about 20 hours of tutorials working on this problem. At this point im considering that maybe it is a bug with the devkit.

I’m working on a spyglass mod and I’m running into an issue where I am able to spawn the item, but the engram does not show up, and the items spawned in delete whenever the server is rebooted. When I load DragehendMod Level in the viewport (running dedicated session) I am able to learn the engram, craft the item, and spawn it. The engram doesn’t exists when loaded on dedicated servers and spawn in spyglasses are deleted on server reboot

Some settings I have:
Devkit: v312.2
WorldSettings: Primal World Settings -> Primal Game Data Override: PrimalGameData_BP_DragehendMod
WorldSettings: No other items have been modified. No forceload map etc.

Here are the modified items from /Mods/DragehendMod/PrimalGameData_BP_DragehendMod

Here are the modified items from /Mods/DragehendMod/Spyglass/PrimalItemWeapon_DragehendSpyglass 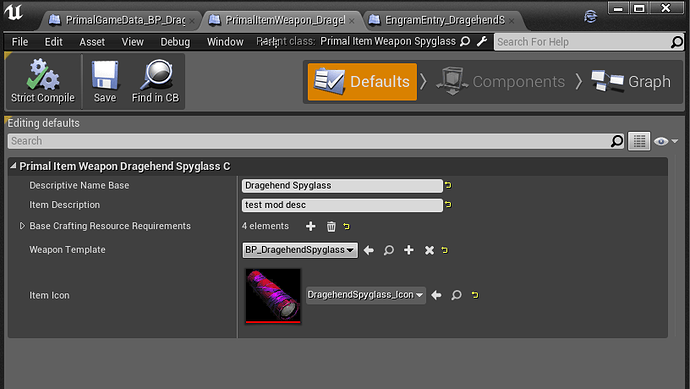 Here are the modified items from /Mods/DragehendMod/Spyglass/EngramEntry_DragehendSpyglass 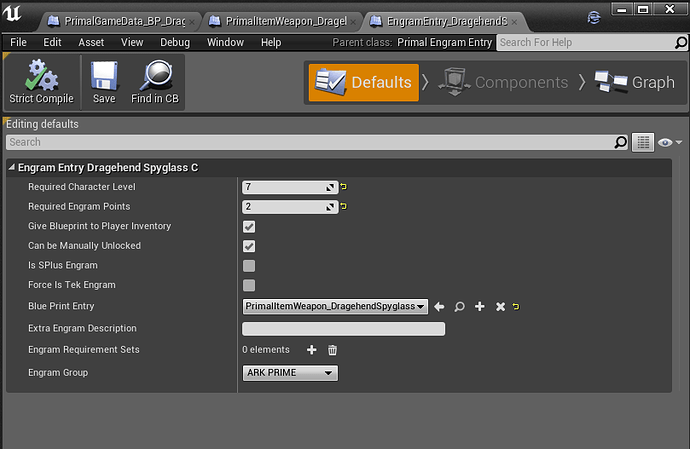 This is working now, the engrams are showing and the spyglass is no longer disappearing. I’m not sure what fixed it but I did delete the mod on my local ark client and redownloaded the mod from the workshop and it works.