ive been making a game thats basically karlson and titan fall combined. you have two guns, an AR and a pistol, both have an ability (AR gets a sniper mode, pistol lets you recoil back and forth), and you have two goals. im still deciding what those two goals would be, because I have no idea honestly. the thing im going for is just a full dive into the game without having to wait for loading screens. you also have a grappling action, so you can grapple to objects (for now there’s no swing, but I might change that in the future or set it to a toggle). im new to the engine, but am learning really fast. its been 6 months almost and im doing well on my first game.

it was going very badly for a long time. however, in the past month and a Half, ive been absolutely popping off.

I figured out procedural generation with instanced meshes, and ive managed to create something that quite literally has ZERO DROP in fps when it spawns a level. 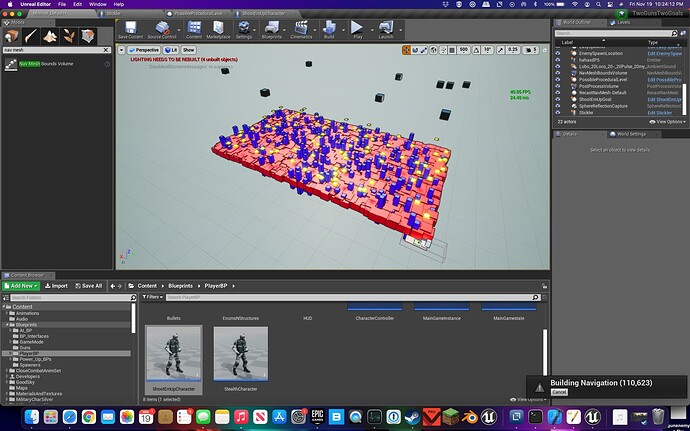 you see that giant thing there? thats the size comparison of ONE LEVEL and the default shooter level. to scale. THAT generates instantaneously with no drop in fps. as in 0.0000000 fps. ITS INSANE. that means I can procedurally spawn levels DURING GAMEPLAY with NO lag worries. im loving this right now. and ive made it intuitive enough that you can change the probablity of different meshes and add different ones SUPER EASILY. here’s the code, for anyone who wants to use some procedural generation 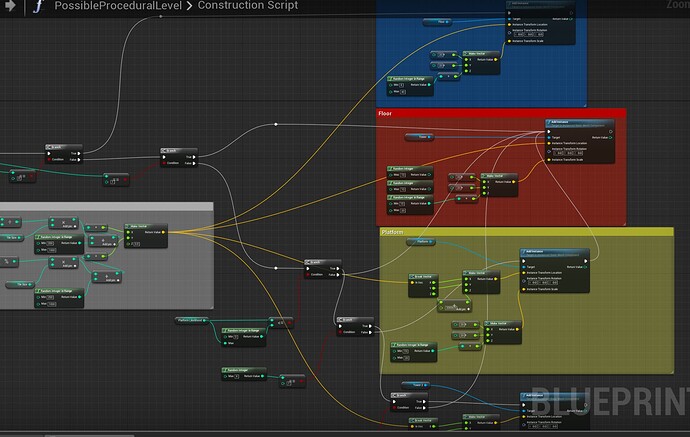 other than that, I fully 3d modeled all the models I need for the game. ive been using the military characters assets as placeholders, and I hated them, but NOW I have my style the way I want it. I modeled it in nomad sculpt, but sadly you cant export the textures on there so im still yet to do them. ill post when im done. but its a very cubic style, so everything is just rectangular prisms only. it sounds unappealing, but with a metallic texture it looks REALLY nice.

quite pog, thats all I have to say. im gonna actually start updating people on this, because so far I have not made one post describing it.

Love the passion and energy in this one post. Although we were promised an update and you’ve got us waiting and pumped for more. Please??
What you’ve accomplished with just a few months with UE is so genuinely impressive and we’re totally stoked to be able to see the development of your first game.

Keep up the extraordinary work! Hope to see more soon

Yeah, time to come out with all the new info!

I finished all the 3D modeling/texturing and will be adding it in when I fix my problem with blender, talked about here Help with exporting model from blender - #2 by emayan. At this moment, I’m working on the AI, which is currently able to go to points, chase the player, and shoot at the player, but nothing special yet. I’m figuring it out lol. Luckily, the 5 different behavior trees I’ll need won’t need to be super different.

I’ve also done some bug fixes, some super good optimizations to make the FPS higher (currently it’s sitting comfortably at around 54) and when I add the models I’ll post a video of the actual gameplay!

I took a break from UE4 for a bit, since I had exams and it was a ■■■■ show. but something happened. a bunch of my code got deleted because I was importing a mesh, and it was incorrectly imported, and when I deleted it there was other things caught in there. so there goes my player controller, my game mode, game state, and pretty much everything having to do with the player. even the HUD. the only thing left is the player code itself, thank god. if that deleted I wouldve just quit this project. im going to go to one of my backups, since I havent changed anything in those BPs since the backup two months ago, but im gonna have to manually import everything. glad I made that backup.

I have been having an issue for months now about rigging the character model. It never worked. I finally made it work cuz I found this video Blender Manually Assign Bone Weights - YouTube This is BIG. WE GOT ANIMATED 3D MODELS BOIS 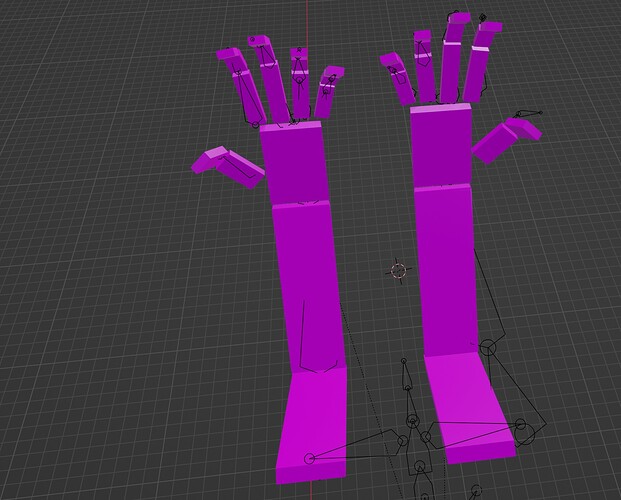 It’s supposed to be metallic btw

I’m on my iPad rn so that’s the only picture I have, but when I get home I’ll put all the photos. Basically there’s this glitch in the place I model my 3D models (I use blender for rigging and texturing) where if you put brush intensity above 300%, the models vertices start glitching. It basically looks insanely spiky and full of triangles ITS JUST WACKY. It is very good for me that I found it, because it’s much easier to 3D model since it’s not super hard and I’m not artistic in the slightest. I’m using cubes or rectangular prisms for every other thing in the game though, including the character model which is rectangular prisms, the guns, the powerups, the enviornment, everything. One amazing positive of it is I barely have any vertices! My character model is 600 vertices, my gun models are 3000 and 9000. All the enemies are below 7000, except the boss which I don’t know if I’ll use and will also be alone while you’re fighting so it wouldn’t even matter. I bought a new laptop, so I’m OFF of my MacBook (thank god) so now I have full control over everything without apple screwing me over. On my MacBook it ran at 40 fps, but on my g15 with an i7 and a 3060 it ran ABOVE 120 FPS. So my game does NOT have a performance problem, thank god. The toon shader also doesn’t seem to impact anything, which I’m very glad about. I have to see how it’ll look with my 3D models. Anyways, I’m gonna rig the other enemy models (it’s really just their guns lol) and start FINALLY burning the placeholder assets I’ve been using in a bonfire. And then after that… the death of me, AI. I’m gonna have to learn it anyways, so… pray for me lol

PS the thing I talked about last post worked out in the end, so we’re good.

Hope you’re doing well.
Glad you decided to keep going with Unreal and your project development. It seems to be paying off

Huge congrats on the animation improvements! Hope we keep seeing your progress with UE here on the forums. Its such an honor seeing your growth! 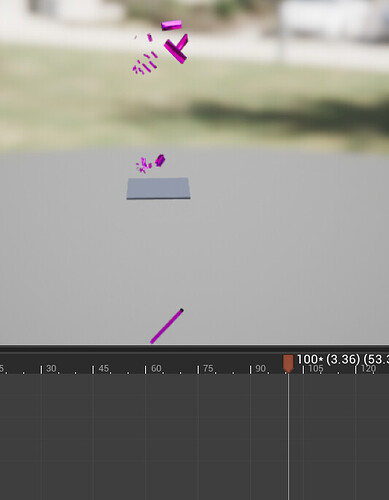 You’re going to become an animation professional with all this practice. Keep up the great work. You can do it!

well considering im doing ai at the moment, not yet

Hey guys. I’ve been going through a really tough time in my life right now, and I’ve practically lost all motivation for unreal engine. It may come back, it might not, im not sure. I want to try to do it today, because I worked too hard for too long to give up now, but im just generally unhappy. If the problem resolves (it hopefully will) then I’m sure I can go back to it. If it doesn’t, even though I may come back eventually, it’ll be a long time from now. I’m gonna see if I can do something new in my game, maybe reforming the grappling system and making it a swing system like I’ve been wanting to. Or just going ahead and making the game moddable. Thank you for the support you guys have given Two Guns Two Goals, and hopefully you’ll see it come out in the future. I am surprised by how long solo game development takes, especially when you have an actual life and it isn’t your whole day. It’s been 8 months now, and it’s gotten so bland and boring.

I hope that if I make it moddable, the community will develop mods that will inspire me, or I could literally just ask if I can put it in the base game. Once I make the AI, and make the animations, im going to release the game for free, and make it mostly open source, so that way I can get a real baseline for what people like, and maybe not have to do all the bug fixing immediately. Maybe I can work on some more basic games afterwards: I had an idea for a geometry dash clone that was multiplayer. If I do release it I’d make it free. It’d be a good start to multiplayer, since there’s not too much complicated things probably. Well I’m gonna head out. I’ll update you guys tomorrow (if I remember) about what I did today

Well I’m doing my update today because I don’t care lol. I did simultaneously nothing and a lot at the same time. I realized HOLD ON, I CAN JUST STEAL THE SHOOTER GAMES AI CODE and I tried to do so but tHeN it became annoying because no code ws found (it’s in c++) and that was an issue. I found the solution but I’m already off my laptop and I’m tired so. Other than that, I had an issue trying to download simple UGC (it’s fixed now) so tomorrow I’m gonna have one hell of a productive day. If I can import all the AI to my game, I’m absolutely releasing it earlier than expected. I’m absolutely going to work on my own AI in bp after the fact since I need to learn it. I just want to move onto a new project though. Not gonna lie this is tiring. I’ve decided I WILL release this game for free. I didn’t want to do it before, but now I’ve realized even though I’ve worked extremely hard, I still need feedback on the game more than anything, plus it won’t blow up even remotely as much if it’s not free. I don’t think I can do any advertisement, so rip. I need some Rep for solenodon studios, and making this accessible and moddable will give me some if I can play the system right. I will update you all tomorrow (if I am able to work on UE4) on what I did. I really hope I can just take the AI that’d be so much easier (even if it’s a band aid on a cancer)

Yes I am an emotional roller coaster when it comes to motivation, what are you gonna do fight me lol

ok so update: i suck at c++ and im just gonna buy an ai lol. ill redo it later on. for now, can someone PLEASE help me in learning how to install Simple UGC? i dont understand

the AI’s installed now. i just gotta make it move towards the player (you would think thatd come out of the box lol). ill work on it

I read earlier that you were experiencing a really tough time in your life and have been on an emotional rollercoaster. Are you okay?

You are absolutely correct in that it is quite challenging to complete game dev projects. As a hobbyist, I have my share of unfinished projects (LOL!) - especially when you have a life to live that includes work and family life. That’s why it’s so important to remember your “why” and keep going!

I’m happy to see that you haven’t given up on your project! “It is only our dedication towards our passion that distinguishes a champion from the crowd.”

Sending you positive vibes and wishing you great success on your project!

Well, make sure to update us on your machine learning journey as well! It’d be super fun to watch that learning process