Been kind of not satisfied with the fact, that I cannot generate navmesh upside down. So I decided to recreate the old Unreal’99 path finding technique with use of an A* algorithm.

Well, I got something

This is not intended for big areas, but, I’m planning to optimize, add automatic grid generation and update it with spider and flying path nodes. So, basically you’ll be able to create paths on any surface you want. Or even in air.

This is a proof of concept so far but I wanted to know what do you think? Might be tempted to make a tutorial on how to do this. It is BP only after all 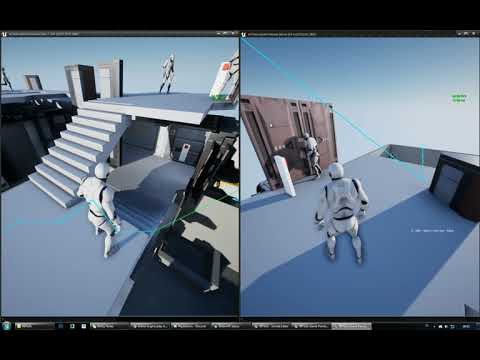 Made A* pathfinder as a component, it returns a list of points that pawn can go to, but also it enables pawns to do actions. A pathnode that pawn is trying to reach might require an action thus, before reaching the desired pathnode a pawn has to first perform this action - go to a button and press it. But only if the button hasn’t been pressed already.

Seems I didn’t have to do anything for it to work in multiplayer as Unreal handles all the AI on the server anyway. Cool.

Very cool! I’ve made a simple implementation myself, but your component- based implementation looks much nicer :). A tutorial or community project would be great!