During transition from Root Motion “start_walking” animation to in-place loop “walk/run” character speed goes down to 0 and then starts to accelerate again.

What causes that? How to trasmit speed from end of the first one to the beginning of the next?

On the picture: “Doesn’tMove” bool is true when both axis values are zero 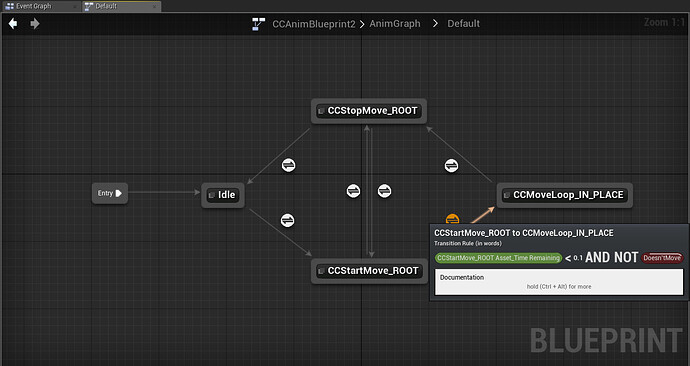 No, the blendspace’s values are set correctly. It’s just about when the root motion animation ends it breaks any movement changes

What are your parameters between the stop and start move(top and bottom nodes).

Hi, did you manage to have smooth transitions between root motion animations and in-place ones? I’m facing the same problem here…

If you are using root motion and casting to the movement component for speed and velocity and using the var to try and control the movement using a speed value in the blend space the two will conflict and you will land up with an unpredictable result.

Root motion is a self contained data set that has both speed, velocity changes, as well as direction built into the data so when you check the box that says use root motion the capsule gets glued to the root of the animation data set and goes along for the ride. By casting to the movement component what you get back is a value as to how fast it is moving in relationship to the root motion animation as to distance traveled and by feeding it into a RM blend space you can land up with a stuttering effect.

If you want to use root motion bound to the movement dynamics of the movement component you could try, as I’ve yet to try it my self, setting the animation type to “ignore root motion” which should ignore the translation data.

In theory, as once again something that I’ve yet to try, RM does not need a movement component and it’s only value in an all RM design is simplified collision along with [in-air] physics.