The console key you can configure in Project Settings / Input, at the bottom of this tab, is currently transient. Any changes made to it takes effect only while the editor remains open; when you restart the editor, the Console Keys property is reset to its default.

This is a problem for me because I cannot figure out which is the default console key. It looks like an asterisk, but pressing Numpad *, 8, or shift+8 doesn’t opens the console. Also the button below ESC doesn’t works, it might be an issue with international keyboards (mine is Brazilian ABNT2). The button below ESC (apostrophe for me, ') opens the Gameplay Debug Tool.

Do you have the (~) on your keyboard? This is called a tilde, and is what we use to currently open the Console.

Also would you mind telling me which version of 4.7 you are using?

Either way the editor should save the keybindings you change or edit, however there could be a compatibility issue with the alternate keyboard you are using. I will do some testing on my end to reproduce what you are reporting.

Pressing my ~ key does not opens the console. Neither does the key below ESC, which for me is the apostrophe and it opens the debug tool instead.

I’m using the 4.7 built from github source, up to Sunday’s (February 15) commits.

It had not previously occurred to me that you were attempting to set the console key-binding within the ‘Project Settings.’

Try going into the ‘Editor Preferences’ and within the ‘Keyboardy Shortcuts’ section mapping the key to the console window. Use the image below as reference on how to do this. 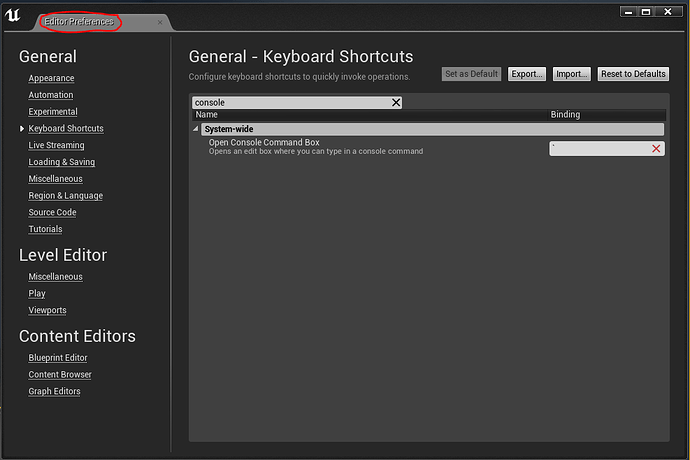 You can map any key on your keyboard to this function. Let me know if this resolves your issue or if you need further assistance.

First I tried changing it to apostrophe. It would still open the gameplay debug tool.

But even if it did work, there’s still the issue that the console key isn’t saved in project settings.

You could try changing your keyboard layout in Windows’ control panel to Brazilian ABNT2, perhaps then you’d experience the same issue I’m having.

Apologies for the late reply! Things have been quite exciting here at Epic this past week! Unreal Engine 4 is Free!

Anyway, I found a bug report entered into our system for this issue, and it is marked to be fixed in an upcoming version of the Engine. I appreciate your patience during the testing process.

Let me know if you have any other questions or need additional assistance.

This issue does appear to be fixed now. Issue UE-4533 still exists and is marked as Backlogged. It can likely be closed as fixed.

Thanks for the notification gsfreema. I have gone ahead and updated the issue internally so it also reflects on the public issues tracker.