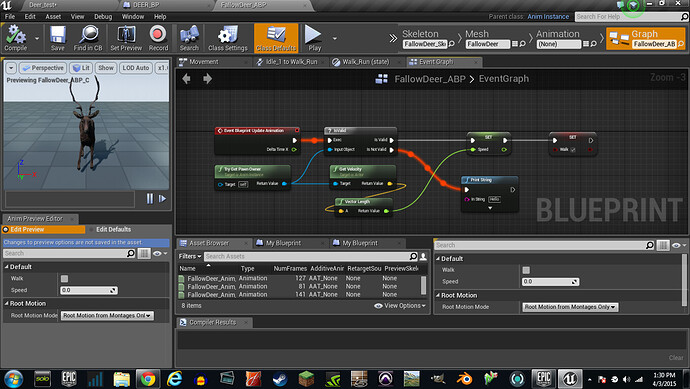 So Now All of a sudden without anything being changed My model is not valid.
NO matter what I do he’s not valid…And i honestly didn’t changed anything.
It’s setup NO differently than any other pawn…It worked when I first put it together and than all of a sudden just decided to stop being valid I assume…

Can Anyone Help?
4.7.4 Has been nothing a but a nightmare for me thus far. Crash Crash Crash!

“TryGetPawnOwner” returns a null value until there is actually a pawn in game. If you go ahead and PIE and select an instance from the debug filter, you’ll see that it will return as IsValid.

EDIT: PIE with an instance of the character in the game

I should have clarified that. There is definitely a "pawn owner " in Game. The deers BP that’s has the anim BP attached and it’s skeletal mesh.
If I play the game with THAT BP…or remove and drag another instance in…and print string if ts not valid, the print string prints constantly.
So im not sure what the problem is. In the game or not it says not valid.

Just wondering if maybe You know of something Else I can try??
i’m not getting the same issue with other BP’s but I’ve noticed that even though there is only one DP on the screen, when I go to debug…I have 3 maybe 4 to choose from…is that normal???

Can you throw a PrintString with a different string off of the nodes coming out of the isValid node?

I am running into an issue when I PIE where the PreviewInstance in the debug filter is throwing the notValid string, but my AnimBP still works as expected because the instance in the level is working as expected.

When I decide to play in a standalone game, the notValid string stops playing because there is no preview instance.

UPDATE: I entered UE-13694 as this doesn’t seem like the right behavior.

I just updated to 4.7.5. I’m gonna Loa it up this evening and ill see what kind of behavior I’m getting. Ill add the print string and try as you did.