Ok I hadn’t done your #5 but it didn’t help. Well now it kicks out after a few seconds of black screen, whereas before the black screen just stayed there.

I’m not sure it is meant to work on OpenGL. How does it run with Vulkan though on the Quest 2? What are your framerates?

@Brickan @VictorLerp I did some more testing and there’s something special with the 4.27.0 VR template project & Quest 1. Switching the directional light to static didn’t make any difference in fps.

The VRtemplate level does run at 72 fps though if you just create a brand new blank project and migrate the VRtemplate level into that. Just change a few settings as I described a few posts before this one and also import the inputs and it runs 72 fps - even with a stationary light (0 dynamic shadow distance or it will drop to 50-ish).

One thing though, as soon as you start shooting at the ball / boxes, the gpu spikes and the fps drops. See pic. Something with physics maybe? Are those handled on the GPU? 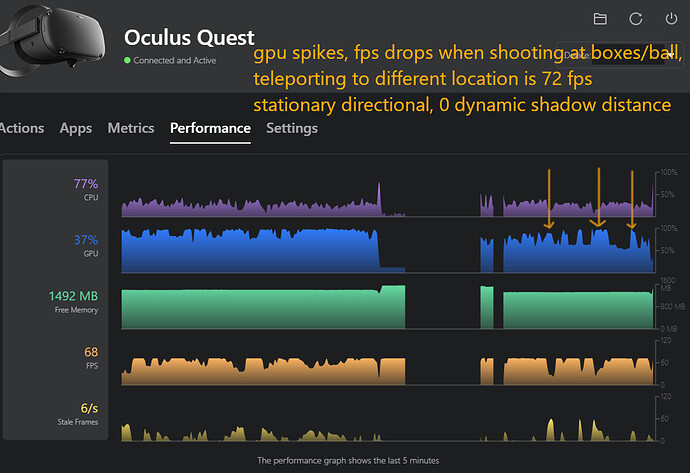 Ok I guess I didn’t actually try importing the 4.27 template into a blank project, just my own level or a 4.25.4 level. Both of which didn’t work out well.

Also, for the physics thing, check out this thread: VR Template Physics Issue 4.27 - #13 by VictorLerp

I want to say that vulkan enables some sort of tone mapper because the colors I’m getting in HMD are matching what I’m seeing in desktop lit mode with tone mapper on.

No idea how to disable tonemapper as it hasn’t been an option directly anywhere.

Success importing 4.27 template level into a blank project and getting it to run!

I did my first build to quest 1 with the VRtemplate map. with statfps I get 29fps average? is that normal? it goes to 40ish if i turn off 4x msaa

disabling all OpenXR plugins - works for me !

I’m on the oculus branch 4.27.1, but it all runs perfectly smooth for me. I also have ASW working correctly and that makes even greater jumps in performance

little build you can play with

what about the colors when it runs on the headset? Are they the same as you see in the editor?

the colors on 4.27 are closer to the lit mode. A teensy bit lighter. Personally I’m using all unlit materials. I’m attempting to toggle off the tonemapper subpass and see if that corrects my colors being too dark.

let us know if you figure out how to do that

what is this? Oculus maintains their own branch?

nice, thank you, did not know of that.

33000 commits ahead? ugh! Any idea if it touches any non-Oculus stuff? Or does this stuff almost always get merged back into main?

There are changes to non-Oculus stuff that we don’t take into main, so don’t expect to be able to jump back and forth between them.

If you have plans to ship on other platforms we suggest you stay on main as we can’t provide support outside of it. The team won’t look at your report if you can’t reproduce it on main, which could put you in a difficult spot if you don’t have engineering resources available. Maintaining two branches or porting from one to the other can after months/years of development be difficult. Make sure you consider your options!

Thanks for the reply. I’ll keep a watch on that repo, but definitely we want to stay with main trunk where possible. With our changes, it took a couple of weeks to merge up to the current main release, def don’t want to make it any weirder, especially not on other platforms.