Anyone know if the new “r.Mobile.TonemapperFilm” feature in 4.16 can be used with mobileHDR off?

Or is mobile HDR required? Anyone know about the performance hit using it?

The tonemapper is part of Mobile HDR.

The tonemapper is part of Mobile HDR.

Thanks for the info - I tried it myself and don’t see the difference to the old tonemapper property in terms of performance. What is the difference exactly? I was just trying a different color LUT and performance on a S7 drops big time

Take a look here: https://docs.unrealengine.com/latest/INT/Platforms/Mobile/PostProcessEffects/#enablingtonemapperformobiledevices. There are before/after screenshots here to show the difference.

Take a look here: https://docs.unrealengine.com/latest/INT/Platforms/Mobile/PostProcessEffects/#enablingtonemapperformobiledevices. There are before/after screenshots here to show the difference.

Hi Chris yeah I am aware of that and had already tried it in the past with the command in that documenation. I’m just wondering what the difference is with the new command in 4.16? (not in the documentation).

I believe we just added r.Mobile.TonemapperFilm as a separate CVar for mobile so you can have it set differently for desktop (default is enabled on desktop, off for mobile).

Could tonemapper issues be causing this problem? 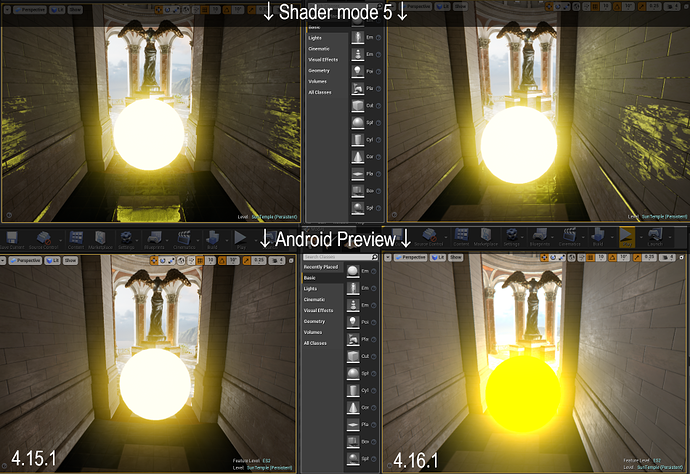 Hi! I updated to 4.16 but Emissive color is strange(May be) It’s appears normal on the desktop, but it’s changes when Preview rendering level process on Android preview, same as Android device.>< I also test it on other project like...