I have a project that is based on the 3rd Person template. The character jumps, idle/walk/runs and all that perfectly fine, until I updated from v4.12 to v4.14.

Now, after the update, everything opens and looks fine, but the character’s animations aren’t working properly. Now, when I jump, the character jumps but is stuck in a fixed pose, like a statue. Same with Idle/Walk/Run. He moves but the animation is just a statue rather than the idle/walk/run blendspace.

In the Animation Tab, all the animations, montages, and blendspace previews look fine. The character is doing what he is supposed to regarding animation.

Does anyone know what I have to do to get these character animations working again in v 4.14?

Unfortunately, yes, it is pointing to the anim class. 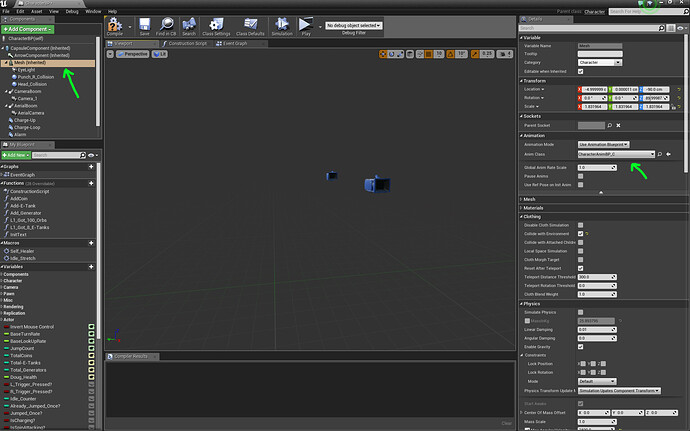 For instance, my character’s jump animation starts with a crouch, and then he thrusts upward into a “fist in the air” posture. Then, the state machine would take it to the jump loop etc… But my character is instead, crouching (The first frame) and he is a crouched statue for the whole jump, until landing.

Any idea why that could be? It’s been working perfectly fine in v4.12, it only started doing that as soon as I updated to v4.14.

I’ve migrated my AnimBPs every major version from 4.7 up to 4.14 without issues so far. I’ve just test-migrated an older test-project that was still 4.12 to 4.14 and it still works.
Have you tried to take a look what happens in the AnimBP in Debug mode (just start game in editor, alt-tab to the anim-BP and choose the current running anim-class as debug-preview… which is a pullodown menu left to the skeleton in the anim-bp … sometimes hidden behind those two arrows if the monitor is too small)? You should see exactly which paths are taken while playing… and even how far that yellow keyframe slider is moving forwards if you doubleclick on a state of your statemachine at runtime.