before i start my big complaint i have to to say i love working with unreal and i really respect the stability, the capabilities and the user friendly interface of the engine. I managed in a short time to realize good looking demos for my clients and implement even tricky functions by using blueprints, but…

THE AGE OF SILENT MOVIES is over.

I am still presenting my video intensive programs for training use inside the editor because the audio for videos is still not working in packaged games. In 4.12 this did not change, it even got worse because the audio is now neither working in packaged games nor in the editor. O.K., you can call this consistent, but it is very disappointing to have this issue in such a high ended program.
Here are the facts:

I always wait for the loaded event from the player before using the videos and everything works fine in the 4.11.2 editor, even simultaneous playback of three videos on textures with separate spawned sounds! But the community needs this in the final product. The future of the usage of the unreal engine for corporate applications like training (that’s what i do) is directly linked to this feature. The problem is known:

the bug number associated with the issue is UE-12185

For everyone who is interested in the issue i can upload a small videoproject on my dropbox.

Thank you for your post. I have updated UE-12185 to reflect that additional developers are experiencing this error.

I can confirm that in UE 4.12.5 there is no sound with a video file (mp4) when using the “Create Media Sound Wave” as described in Media Framework | Unreal Engine Documentation

So the only way that works for me is to split the video into an image and sound manually and to play them at the same time. It looks to me as a similar approach to the MediaSoundWave but an external software is required to split them. I will briefly describe a way that uses VLC media player (2.2.4). I tried two mp4 files (from different cameras) and for one I could not even see the image in the UE4 (already known issue) so I will add a step how to convert the video as well. Anyway, 1080p worked in my case. I will also describe how I looped the video with the sound since the video file did not send the “On End Reached” event in my case. Note that all observations and described steps were only made and tested in the UE4 editor - not in a final standalone product/game. 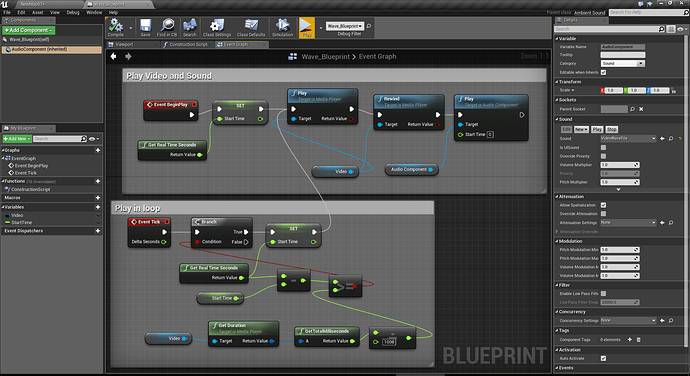 Well, that is supposed to work so let me know if it does not.

I fully agree. The workaround is time consuming when you need it frequently and moreover you need to download and install a third party freeware, which people may not like to do on their programming machines due to a potential malware threat (at least I hated to do it). Also I am not sure if there is any assurance that the picture and sound stay synchronized. I only added this workaround because the development of this issue goes clearly in the other direction during the last year. Also I was happy to find a codec conversion to fix the mp4 incompatibility that occurred for some of my files.

Anyway, if you find out that the Epic team addressed the issue one way or another, please add a comment here to conclude this topic.

Hello Vlhruska,
thank You for Your Workaround. I already tried a similar Workaround with a seperate Audio Wave and it worked. Anyway, as i am loading lots of different URLsfor different videoscreens, you can imagine how time-consuming and debug-intensive this workaround is!
I think it is really important to have a complete overhaul of the media System and
I BEG ON MY KNEES TO THE EPIC TEAM TO IMPLEMENT A WORKING MEDIA SYSTEM

The longest video i used was about 8 minutes and it stayed full sync till the end of playback, so no worries on this side.
Again, thank you for your contribution, i will keep you informed what is going on.

Just for visibility sake here is the issue on the public Jira site so you can track and vote on it.

With that said, we are aware of the issues with the Media Framework and have already begun re-working the system for improved functionality which we hope to have implemented into 4.13.

Hello Andrew,
a working Media System in 4.13 would be great!
Until the i use a workaround like the one Vlhruska described. Since i load a lot of videos, i had to create a system which uses arrays for loading the videos and the audio wave files.
I think other users might be happy to use this, so i made a simple and very small project in 4.12.5 ( 92 kB ) and put it on my dropbox to make it available for the community. This is the link:

I hope this helps,