3rd Person Character how to move camera to socket?

I want to move the Follow Camera to a socket that’s setup on the Third Person Skeleton, and then back again with an input. What node should I be using in order to see that socket name within my 3rd Person Character Event Graph?

Also, can I do a smooth tween with some nodes, or do I need to use iTween? 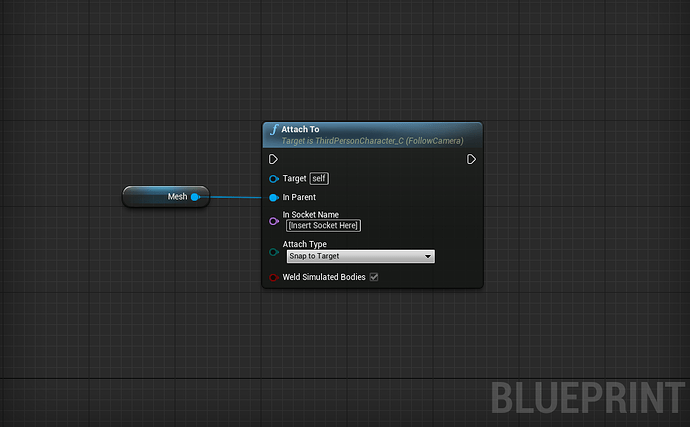 Something like this, I think? I don’t know how to make a smooth transition from socket to socket, though. When I went to move the Follow Camera in real time I opted to use a Set Relative Location node with a timeline to dictate the transition speed from one point to another.

I wonder if you couldn’t set its transform to match that of the socket, rather than attaching it, and LERP the movement between sockets when you need to change. You’d have to keep updating the transform on tick or something, but I’m assuming that’s what the engine is doing in the background when you attach something to a socket anyhow.

What am I missing? It moves, just to the crotch not the head socket.

Not sure exactly not knowing how your project is built, but it looks like you’re giving it a socket name to attach to, but not what the socket can be found in. Your mesh pin isn’t hooked up right now.

Why is your mesh pin not hooked up? And are you sure it’s actually attached at the crotch? When I first started snapping weapons to my characters, it would LOOK like they were attached until I moved around, then they’d sit in space floating.

If it is moving with the character, you probably have an offset issue of some kind. For instance, even though my sockets were setup in the right place…the points I needed my weapons to attach at were not set at the original (0,0,0) in Blender…so when I attached them, they’d attach offset. I had to move the mount points to (0,0,0) in Blender then apply the location settings.

Remember every object has an origin point around which it’s transforms work, so if you have a character and its origin is at it’s head rather than its feet, it’s going to attach at its head when you snap it to something.