–> exporting the whole thing with datasmith to unreal. 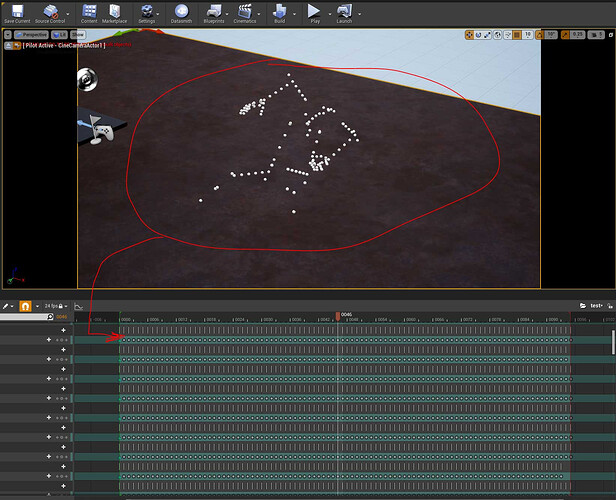 Result inside Unreal:
The Character Mesh doesn’t show up as animation.

The geo is was loaded. I can see it inside the folder. But for some reason, the animation with the character won’t show up.
All I can see inside the sequencer, are the white dots… as you can see on the screenshot below.

So what am I missing here when using Datasmith?

If I just export and .fbx file it works. I can see the animation, the rigged character and all is fine.
But heck… I want to get this done using Datasmith.

Thank you so much for any little help,
appreciate it!

This is actually normal behavior, as Datasmith does not support Skeletal Meshes for now. We do support baked mesh animations, which is why you see all these dots in your sequencer.

I would suggest having a look at the Datasmith doc part about animations right here to learn more about the limitations.

Thank you Antoine, appreciate your info.

Hmmm… that being said. When Skeletal Meshes are not supported for now what caching file do you recommend using?
If the animation is within Maya or 3dsmax. Is it point cache that you recommend?

And once all is cached, Datasmith allows point cache data to load into unreal?

Through Datasmith : no caching. We do not support geo deformation, just transform keying on static meshes.

I would look at either exporting your animated skeletal meshes using FBX or solutions like Alembic for now.

Thank you again. Today, I was running another crazy test.

After Caching, I imported the .abc files into Unreal.
Everything looked great, until I noticed, that the guns which I imported with geo caching do not match the timing.

In both applications, there is no problem with the timing or the location.

After that, I imported the .abc files into Unreal.
Unfortunately, the geo-caching files (guns) do not match the timing.

What you think is the problem?
I know it’s just experimental at this point - looks like alembic geo caching just doesn’t seem to work yet, right?

Thanks a lot for any help,
appreciate it!

This is probably an issue between FBX animation playback and Alembic cache not using the same playback tech.
Is there any reason to not use an FBX animation for the guns ?

This will be more of a question for our animation team

All the exported animation was cached with alembic.
Meaning, all is cached within the .abc files.

The Characters and the guns.
The only difference is the TYPE OF THE IMPORT I chose for the alembic file. 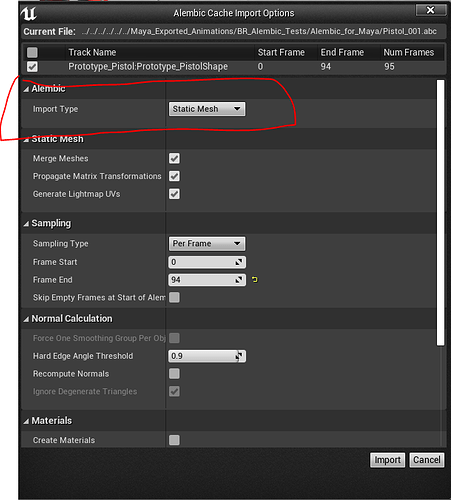 And it’s not clear, why the animation from the guns don’t match with the Characters.

One more question: You mentioned, that Datasmith is supporting baked mesh animation.
Are you talking about cache files like .abc?
Or something else?

I tried alembic files with Datasmith… but that didn’t work.

Datasmith does not support Alembic at all. You will find the supported file types on this page of the documentation. By baked mesh animations I was referring to animated 3D transforms on static meshes, also as stated in the docs in that link I’ve sent a couple posts before.