I have a Widget Interaction Component that should be set up correctly according to several fourm posts.

And my actual widget located in the world:

Yet for some reason, my widget won’t register user’s input at all? My widget contains a button that checks for OnClick and OnHovered and neither trigger. 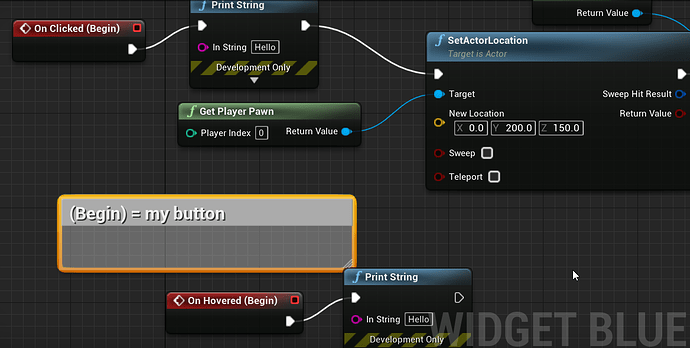 Does Should Press print?

yes it does. But neither “Hello” prints

This setup seems fine as is. It’s something else that has not been addressed.

So my widget has a Canvas Panel with a child Button. CanvasPanel USED to have Visibility: Not Hit-Testable(Self Only). I quickly changed that to Visible in hopes that was it. But no change.
The widget has NOTHING else besides Canvas Panel -> Button and I created a new widget, deleted the default CanvasPanel and set a button as the only and main child of the entire blueprint. Then checked for OnHovered and OnClicked and neither ran.

Interaction Source: World is correct, because my game is for VR and I want the player to be capable to click a button. (But I did try once setting it to center screen, but still no luck) That’s why the Event that runs the log Should Press detects the trigger. So the Widget Interaction Component is a child of the Motion Controller Component which is a child of a PlayerPawn so it looks like:

Hey, I might’ve found something. Like JUST found it seconds ago.

So my “main menu” for my VR game is INSIDE a inside-out sphere, when I took the player and the widget out of the sphere, it started working. Is there something like collisions that can mess it up?

yeah that was it. Disabling collisions on the sphere fixed it. I have no idea why. Since the debug trace said it was hitting nothing.

Thanks for helping me out

I think the debug trace only reports positive hits. As in: it’s tracing for something specific (like trace for object type), ignoring everything else.