Hi everyone,
My friends and I are trying to create an interface for our project with the Oculus Rift. We want it to be in 3D and were using some Text Render to show informations of the game. But when we try it, they’re all blurry when the player starts to move (also they’re reacting strangely to the light).
Now we’re testing the new UMG but it’s the same problem and I’m can’t find a way to place my Widget in my Character Blueprint and then access its values.
Anyone has already tried to create an interface like that ?

Can you post about the blurry text render actors on the answerhub in the bug reports section so we can better assist you? You can find this at http://answers.unrealengine.com. Thank you!

I am doing interface in 3d. It was blurry at some point due to motion blur in postprocess. But its fine now when i turned it off.
Yes i gave up on UMG for now, using everything in 3d. Luckily my game is simple.

It is important to set the Compression of each texture sample you wanna use to TC_Editor Icon also set the MipMap stuff to UI.

I check on http://answers.unrealengine.com/ and found someone with the same issue. I post a message in order to said that it’s not solved. But thankfully someone posted the command to deactivated the motion blur and as Nawrot said it’s working.

And with also have other problems with UMG. We were trying to put a material on an image inside a canvas but in game its scale is changing or it doesn’t appear (while it’s working in the UMG editor). And this change of scale is link to the position of the mouse

The right image below appears only when my mouse is on the “Stop” button of UE. 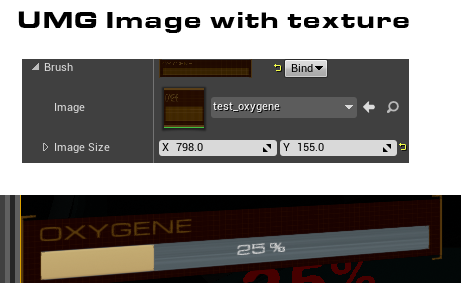 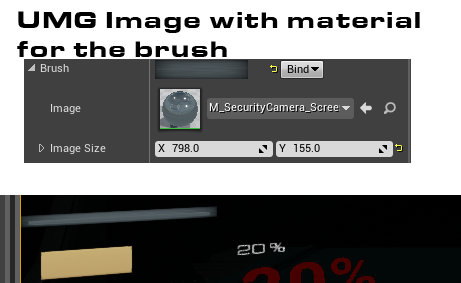 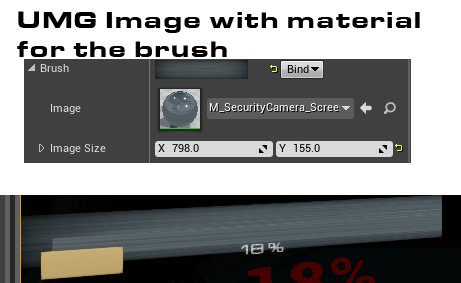 In regards to the blurry text can you try lowering your Anti Aliasing settings? Some machines can’t deal with “Epic” settings and it causes things that are moving to become blurry. I’ve found lowering the setting helps alot.

His problem is that The Material on the Mesh (Wich represents the UMG Widget) is renderd like all materials in game they also receive lightning and post process. He would need a second render layer to get rid of that if he wants to maintain his pp in his game

His problem is that The Material on the Mesh (Wich represents the UMG Widget) is renderd like all materials in game they also receive lightning and post process. He would need a second render layer to get rid of that if he wants to maintain his pp in his game

I don’t think that’s the only problem here. Our 3D widget’s scale is changing when we move the mouse on the editor. The material is rendered in the game (not exactly like we want) but it’s not the right position, scale etc. But it’s working with a simple texture.

Totally agree. We need container that can be always attached to active camera.

Totally agree. We need container that can be always attached to active camera.

I 100% I’m still hoping to figure out a hack on that very issue.

I did some interface working in 3d. I made blueprint with all widgets in 3d, attached it to camera. It works ok, but at beginning it lags a bit behind camera (you can see small jittering). But it also has one huge problem, it is hard to calculate what is visible on screen what is not, ie where are edges of GUI in 3d space. On top of that camera behaves strange with different resolutions and aspect ratios. Below certain screen resolution it just clips image instead of zooming in/out. All this is fine when i tell camera to keep aspect ratio, but then i get black borders. I made hacky solution around this, will probably dig into trigonometry to just calculate what is visible from camera FOV and gui distance to camera.