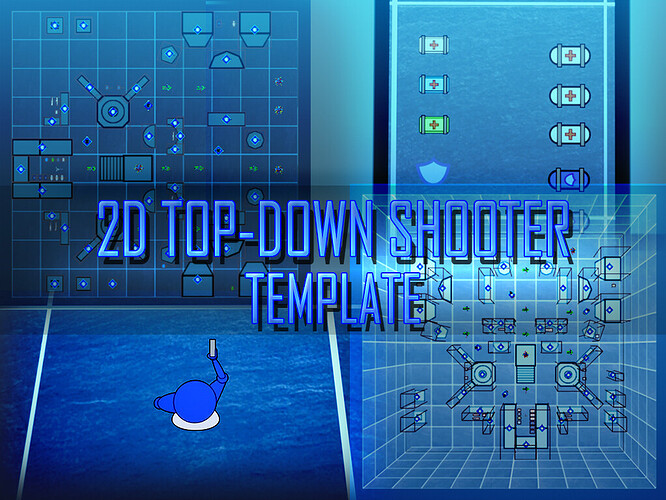 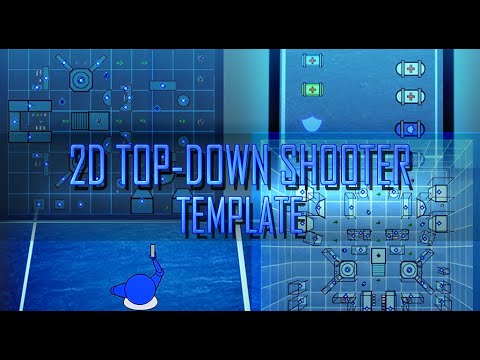 2D Top Down Shooter is the two-dimensional action-arcade experience template to make shooter development for the iOS and PC flash games much easier. Blueprint code setup and ready on the go for gameplay and instant action.

As an added bonus we also have a built-in Main Menu Template packed with your generic single and multiplayer experience as well as a credits and unlockables menu for any extra perks you want to slide into your game.

Constructive criticism is absolutely welcome. Tell me what you all think folks!
SUPPORT DISCORD CHANNEL

UPDATE: A screenshot of the main menu template.

Could really use some feedback on all this.

I have updated the first post of this thread. The 2D Top Down Shooter Template is finally released to the Unreal Marketplace! Let me know what you all think if and when you purchase it. Feedback is welcome and I always improve the template whenever due.

Got some suggestions / feedback for this framework. Overall this looks like a very solid basis for a game.

Here are some things I would like to see in the template.

Thanks @HeadClot. Great suggestions I shall add in the next update (the artillery will probably have to come the 2nd next update however).

Luckily I already got a head start with 2D tanks, sniper zoom, and grenades, so I will upload a video showcasing that very soon.

The current video is a little outdated as the sniper rifle in the template does in fact zoom an additional view now, however it currently just expands the camera view higher so the player can see more enemies in their peripheral view, making overall aiming more easier.

As for melee, I have made a slot and functionality in blueprints so I guess its only a matter of getting animations done for it and that shall be a cakewalk to complete.

Expect an update to the template quite soon.

Thanks TechLord ! I am actually curious to see someone remake SMASH TV with my template.

Any date on a new update?

Any date on a new update?

Funny, you mentioned that, I have just updated the project to 4.19.
I will be updating the project with network support hopefully by June 2018 or earlier.

My apologies for the months delay on the major update. Long story short, the AI decide to falter and break on me when I upgraded the template to Epic Games’ Special Jamaican Leaf Edition engine upgrade. Apparently that leaf was too potent for it’s own good and it caused too many problems for nearly all of my projects involved. In addition to navigation system changes, there were also changes to the enum and particularly the ‘now’ sensitive Literal enum, which has managed to effectively hinder the behavior tree. It took me a month to even discover that the enum setup has in fact changed and was the sole culprit, I had my focus on the PawnSensingComponet and the PawnNoiseEmitter fearing both were being deprecated. For another, functions are now name sensitive so having my company’s name as it’s intended spelling “Néotl Empire” will no longer suffice as part of the name for my cast function wrappers. I decided to simply replace the high tone ‘e’ with a regular alphabetic one - now “Neotl Empire”.

I hope the original 4.20 update on the template did not cause too much trouble, I have now fixed the update yesterday.

Even so, that only covers the delay from last month. You may be wondering, “What about the other months since June 2018 (the year a major update was suppose to arrive)?” Well, that is another long story that is also very personal and even NSFW to some extent, so to summarize it I will just leave you all with three words - retail job failures, declining health, legal trouble. But I can at least be glad that I am not dead nor in prison, and I still have a roof over my head.

With such barriers out of the way, I can now finish my template as promised (even though I am now far off schedule). The major 2.0 update seeks to include full multiplayer support - multiplayer UI, game modes, and game state conditions for the game modes. Deathmatch, CTF, Control Point (aka King of the Hill), and a few other special ones.

I’d rather not prefer setting another estimated date of release on my products for my ‘naturally gifted’ predictions have gone very rusty and unreliable since my days working on my first game, so we will just have to consider this one a “when it’s done” basis, however I still intend to get this released before this year ends.

The 2D Top Down Shooter template is almost ready for the major update. We just need to finish up with Capture The Flag and polishing. We decided to postpone other features for another major update in the next 2 years. This year has become a strife, and as I just barely survived poverty last year, I was very busy focusing on making ends meet to maintain rent for the very apartment I merely managed to move into (with help). This means progress was much slower than I hoped; slower than last year. We were hoping this would be the final update to end all updates for this template, but as schedule is far off-rails, we decided to make some compromises and postpone features for a next major update. Hopefully the third major update will be the final one instead as we wish to move on to more important projects, such as Maze Qore.

Meanwhile, the Black Friday is still active and it ends on December 4th, we are currently selling 2D Top Down Shooter Template at 70% off as the release of our MAJOR Multiplayer Update is imminent for this upcoming Holiday Season!

I have submitted the latest build to Epic Games for approval. After that (or any necessary changes they require from us), Version 2 will be available.

VERSION 2 HAS BEEN RELEASED!

UPDATE: Version 4.25 of the template is on it’s way. Apologies that it even took so long. I was busy working on Maze Qore Arena and getting the single-player out the way.

It will fix the features and functionality broken by the engine changes in UE 4.25, such as PlayerName from the PlayerState class.

UPDATE: 4.26 Should arrive before this year ends. It has been yet another chaotic mess of a year and we’re only a quarter into it.

A few more bug fixes will arrive. At the same time I will have to scrap some milestones originally planned for the template due to competition conflicts with my game, Maze Qore Arena.

On the bright side, the latter will soon become moddable once it leaves early access.

Version 2.1.1 has been released. Forgot to notify after. Pandemic reasons.

Now with that out of the way, I have an important announcement to make:

For the past years since this template released, circumstances have changed beyond what I would have ever anticipated.

Problem 1: Apple’s despicable business practices have finally become a liability and it took both the evidence of their deliberate anti-consumer programming to destroy iOS devices whenever one attempts to repair it anywhere besides Apple-sanctioned vendors, and the EAG (Epic-Apple-Google) Legal War to finally convince us to deprecate all support for iOS. Far as the EAG War is concerned, I am not taking sides there either. All parties are guilty, especially Epic Games, and they even went so far as to censor any mentioning of Apple on their Twitch streams (and I suppose now their YouTube channel as well). However regardless, one thing is certain: Apple does not care for it’s consumers and would rather force us to go through so many hoops just to even use their services. I was already frustrated at the tedious process and prerequisites for developing products for their iOS products, and personally, I will not waste $99/yo just to have a chance to submit my products in hopes that it even sells, IN ADDITION to being forced to buy a Macintosh computer to package builds. This entire ordeal is required just to test 2DTST on the iOS (lest there is a workaround to this I know not).

I have concluded that Apple and ALL of their products are nothing but a complete liability, both for developers and consumers, so from hence forth, we will not associate nor work with any of their services for game development anytime soon. Consider this a blacklist. We will instead divert all attention to Android for mobile support.

Problem 2: Epic Games.
You can agree, disagree, love me, or hate my entire existence for what I am about to say, I very honestly care not at all by this point:

I am not happy at all with what has become of this company as well as the community (especially them) these past years, ever since the Fortnite Battle Royale machine (and worse) corrupted them. I hardly recognize Epic Games, their developers, nor their fans anymore. They are not what they used to be; the company and community I once knew, respected, honored, and cared for. Lately I have not been the least afraid of voicing my concerns or disappointment of the company’s actions, but only because I cared for Epic and wanted them to change for the better rather than let a company like Tencent influenced them to a path of avarice and… Well I am unsure I am at liberty to say the other problem here on this thread. However after watching a third of Thursday’s stream, I became utterly disgusted. I now realized the old Epic Games is truly gone, never to return. Which also means, It is time for us (or at the very least myself) to move on from this cursed community.

For whatever it is worth, we are still committed to working on the template for it will still take time for our departure from the Epic Games/Unreal Engine community to complete. Unfortunately for me, we still have a handful of games under our belt that rely on UE4 (and 3 of them UE5), so it will still be a while before Néotl Empire is officially gone from here for good. However, while the other members might be still remain active in the community (individually), I will personally be limiting all my interactions with the UE4 community from now on, only doing so if I am convinced there is no other or better alternative (in other words, only if I really have to, not because I want to). All that is considered, Version 3 will be the final version for this product and either the final or second-to-final product we will ever release on the UEM. There might be one more product arriving there should Epic decide to approve it (very minor yet important tool). Besides that, we will be moving marketplace services elsewhere.

Far as mobile support, it will arrive later as an update to V3. It will not follow into UE5’s release either, both because of our discontinuance of Unreal Engine, and because we suspect Paper2D will likely be deprecated in UE5.

If you want to keep track of progress with 2DTST, you can do so by joining our Discord server instead and following instructions for full access. You can thank the terribly restrictive overhaul of the forum’s interface format, we will not update this thread very often as it is now difficult to use the forums (Nevermind that it also managed to magically undeleted every post on the site).

Even in dark times like this… Always ever vigilant.