2D fighter - not given a name yet

As a personal project I’m trying to make a fighting game, and with SF5 just being released I might as well go ahead and have a little nudge at it as well.
The project is going to be entirely blueprint driven. On the side I want to learn how to make realtime FX for this aswell so these will be my main focus points.

So far i’ve made a small blockout scene and worked on reading the input form the player and storing it. So later on I can recall it and determine if the player did a special motion to trigger the famous shoryuken / hadouken!

There’s still alot to do.

Hi , I liked your to do list , very organized , I was thinking about trying to make a fighter as well but I have a very poor animating skills, keeps us updated with your progress , hope you succeed in achieving your goals.

So I’ve been intrested in realtime fx, so I found this tutorial of ImbueFX and used this, please note that this is just a placeholder but I like the pop FX and it’s something that I want when I understand cascade a bit more and materials to make a modified version of it.
I also made a quick sketch of what i have in mind for a fireball.
The first character that I’m going to make will have some sort of Earth theme about him. So his special attacks will involve using the ground. Think of avatar with earthbending.

Edit:
This is what i came up with now
[video]https://youtu.be/0uZKCJP91Fo[/video]

Sorry that I haven’t updated it yet last week but I stumbled upon bugs. I haven’t been able to really get much progress because i had to remake the thing in an older version. 4.11 kept crashing on me.
And now I’m stuck trying to have 2 controllers.
I’ve been looking at tutorials that have like basic movement with a character pawn and then another character controller and letting that one possess the other one but that is not what i’m going for. As it its one controller controlling both characters.

I thought this would be as easy as just assinging a new character BP and add an index with 1 to it but that’s not the case.
Anyway enough about my rambling. I’ll see that I can get it to work somehow since being able to play with 2 controllers and checking the input of both is vital to a fighter :D.

So here’s a small update in video format.
Progress thus far:
collission, 2 player input (found what the problem was eventually), camera smoothing, change input on how player is facing. Still long way to go but first I want my character to be in the game So I’ll be busy with that and then going to add the particle that i made. Not quite sure how i will combine the particle rock with the collission sphere but those are problems for later! 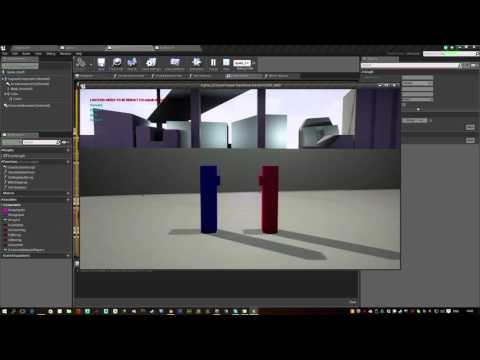 So it’s been a while, but I haven’t dropped this project.
So progress so far is that the basic gameplay elements are there, Only for P1 but I can use the same code for P2 and make diff animations and stuff, but the core is the same.
So now it’s on to make All the animations of all the attacks and then adding the special attacks aswell.

So this time around I added the healthbar widget and also made it that you have 2 working players. 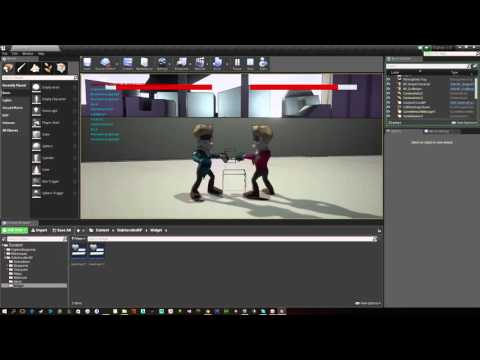 I think I might want to recheck the players because i’m certain that i cant really select which player I want but that’s for a later date!

All attacking animations except for the jumping ones are in the game. Now it’s just a matter of animating those and then i can start on making the right hitboxes for the attacks.
If that’s finished i need to see if the dashing animations are correct and afterwards i can start making particle fx