Hello everybody.
I’m trying to create a terrain in World Machine and import it into UE4, But every time I end up getting a 2km x 2km terrain in ue4 no matter how much the size of the terrain is.

you are exporting a mesh from world machine? I would bring it into maya, blender, or max, scale it in there freeze its transforms then export it again. Or why not scale the mesh in unreal? Or why not export the heightmap and import it on a terrain?

If you’re using a heightmap, make sure that you scale up the size in the importer 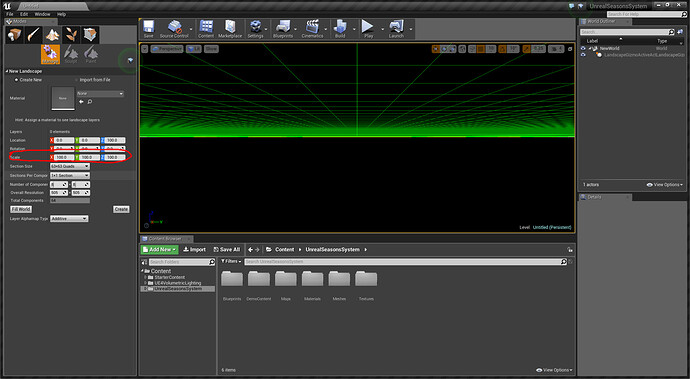 Thank you man really. Both of you… I didn’t know that was so simple

But one question… Does that have a negative impact on performance and is that an Epic-Suggested way?

Your heightmap should be one of these sizes before you import it.

Edit: You can scale the heightmap in UE4 after it is imported but that’s not the proper way to go about it because you are stretching it that way while your tri count isn’t increasing it will result in getting blocky results.

Thank you Alireza, Homie.
How should i set the size in World Machine?

world machine settings are in the world settings window… hah but the settings are here. That said I’ve not seen any issues for using whatever settings you want and just scaling it. World Machine doesn’t work well with smaller than 1km. So depending on what you’re doing, you may want to mess with scaling in uneal. Otherwise 1-1 settings are here

Thank you Alireza, Homie.
How should i set the size in World Machine?

Uncheck +1
Click on Custom so it allows you to input non power of two values like 1009, 2017, 4033 etc.
The value you put there is representing the amount of pixels in the heightmap you output. It’s best to set the resolution according to the size of the landscape you want. So for example if you want to create a 4033x4033 meters landscape you’d set the resolution to 4033x4033 as well. In UE4 you will get 1 pixel per square meter which is the best case scenario. You can still build at any lower resolution and later scale the heightmap up in Photoshop before importing in UE4 but that’d no longer give you accurate details.