Based on a simple L-system concept I found outlined on this blog: http://drilian.com/2009/02/25/lightning-bolts/

I made an implementation myself. One disadvantage of the L-system is that you cannot “grow” the branch. You must create it first completely and then cannot alter it any more (but you can move the nodes of course). I made a branching system that actually dynamically grows and randomly branches. You can set the parameters for the branche chance. This will give natural looking lightning, although natural lightning may come in awkward shapes and or sometimes boring, but that is nature! Doing the branche calculation once (same as in the L-method) is also possible and is best for performance. I think I found this thread already before starting, but is there a release of the code? But still I think I was not so keen on adding 3rd party C-code; rather had a blueprint.

My goal was that I also wanted to make lightning and saw the branching properties in the cascade editor, but they were not implemented. So I thought it wouldn’t be too difficult to make it myself. Well I did, but it was more difficult than I thought. Really days debugging the branching. Eventually it was such an interesting asset, that I made it independent and put it on the market place (Kind of stealing this thread). You can find it here:

Procedural Lightning in Visual Effects - UE Marketplace Support since Engine 4.8, but I think 4.10 and 4.11 revealed some memory cleanup-bugs, so 4.11 and 4.12 are the best versions. 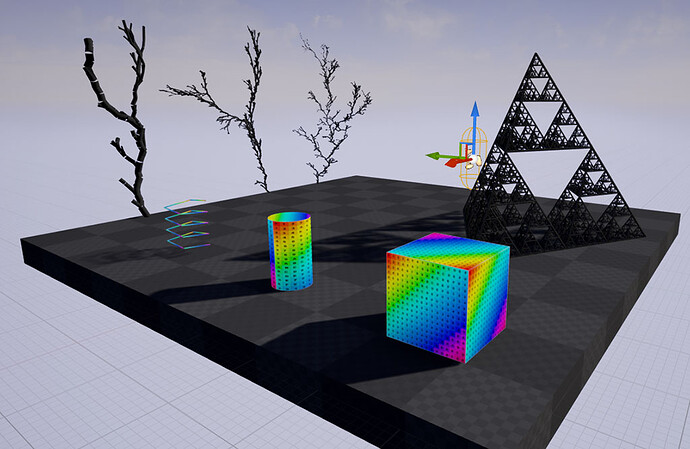 Hi everyone! Last year I wanted to learn how to procedurally generate meshes in Unreal, so I put together a few quick tests of my own. This got some interest from people here so I decided to clean it up and release it for free! I really hope this...

I wonder if this will come as a plugin for Unreal, so we can just install the asset and use it. I need something like that for Planet Manaos for generating the Plasma Storms. Game Project I’m working on at http://www.tozan35.weebly.com