Whole program tears apart on moving around in Blueprint

Most of the times, everything falls apart, while I zoom in/out in Blueprint editing mode. Probably because there is no dedicated graphics card in this PC, just an i7-2600 has to take care of everything. I’m not even sure if it should be considered a bug, or it’s just a cry out from the machine to end its pain, but an official answer would be nice. Other windows don’t do that even during the Engine’s crazy flashing.

Probably you can’t imagine what does “everything tears apart” mean, so here is the screenshot!
It’s just one frame, but believe me it does some crazy flashing while I try to move around with the mouse. 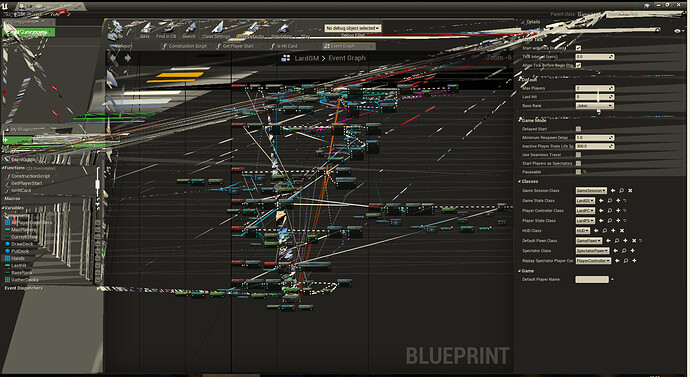 You need a more powerful computer. You should check out the system requirements for running the Unreal Editor and perhaps build something more in line with those, or at least buy a graphics card. I tried to run Unreal Engine on the school computers that didn’t have fast enough hardware and I had a similar problem.

You can find the system requirements here:

Just out of curiosity, what specs does your computer have?

If you have any further questions, feel free to ask me.
Goolog

That PC already died since then, it was quite an old one, with an i7-2600 inside. Not my home PC though, just wanted to access my code from elsewhere. Yeah, I had the guess, it only has to do with the specs of that system.

Let me guess, it was death by overheating? I’m pretty sure that was what was about to happen to the computer at school if I had continued to keep UE4 running. The screen ended up blinking.