Where is the "Spawn Actor From Blueprint" node?

Hi, I’m complete newbie trying to get the basics of using blueprints. I’m attempting to create a projectile and following the tutorial. The only difference is, I’m working from the third person game mode and the tutorial is in the first person.

Any advise of how I can approach this or why it is not working would be helpful. Thx.

I think it named “spawn actor of class” (blueprint is valid class same as C++ class), just use search function and type in “spawn” and you should find it

That’s what I thought initially as well, however, it does not work as I intended or as for the guy in the tutorial. Here’s my flow chart that I created in MyCharacter blueprint: 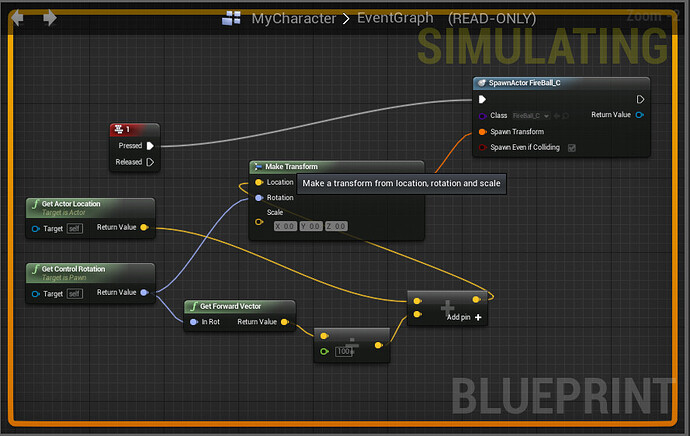 This is a top down game mode if that matters. Any advise on what I’m doing wrong would help. Again my intent is for the character to shoot the projectile. Thanks!

Re-upload the image. Its not showing up

If you cant see the image, heres is a link I uploaded it online. http://tinypic.com/r/30jtls1/8

The node you’re using, Spawn Actor From Class, is the one you’re looking for. It will work fine in any game type. I duplicated your setup in a top-down project and it worked fine. You may not see it working because the projectile isn’t being given any forward momentum, so it’s simply spawning where your character is and then sitting there.

To test that it is in fact spawning, try moving your character after firing and look where it was just standing. While playing, you can also select the Blueprint from the Debug Filter drop-down. Then, if you press your fire key, you should see your white wire between your Input node and your SpawnActor node light up and animate, indicating that it is triggering.

While the game is playing, you can also check whether a projectile has been spawned by looking in the Scene Outliner. Each projectile you spawned should be listed there as an instance (until its lifetime expires, which depends on your projectile settings). It’s possible you’re not seeing the projectile simply because it’s falling through the ground after spawning, in which case you can temporarily disable physics on your projectile to see it after firing.

Ok, thx for help. It partially resolved the problem.

Also as you’ve said I had no velocity set and it was partially the reason why I did not see the projectile. However. the second problem responsible for it is that for some reason my projectile spawns from the floor ground and not from character. Even if I move him, projectile always comes from a fixed point of the floor. I assume that’s because I have to use “Get Actor Array Average Location” node instead of “get actor location” node as it does not appear in my blueprint if I try to find it in “MyController” BP (unless I go to MyCharacter blueprint). If I try to copy all my nodes to MyCharacter BP it does not fire as seen from both debug and outliner.

Sry if this is something basic, but I’m complete newbie here

If that doesn’t fix it, I might need to see what your Projectile blueprint and settings looks like. My copy of your MyCharacter blueprint doesn’t have that problem, so it’s probably an issue somewhere else.

Just seeing your edits now. I would recommend trying to set up what you had in your original picture in your MyCharacter Blueprint and make sure you have the Scale set to 1, 1, 1 instead of 0, 0, 0. A 0 scale means it won’t be visible, and that may have been the problem.

Setting this up in the MyController Blueprint is going to be more difficult, as it will involve getting information from the MyCharacter Blueprint. Your MyController blueprint does not have direct access to the MyCharacter Actor, so you can’t use Get Actor Location inside it to get the location of your character. Get Actor Array Average Location is definitely not what you’re looking for, and is probably the reason your projectile is spawning away from your character.

hmm… alright then doing it in the “mycontroler” is the reason why it spawns from the the center. Once I copy the blueprint to MyCharacter instead the nodes do not activate. Meaning that If I set the button to press lets say “spacebar,” once I am in game and press spacebar it no longer shows projectile being spawned in the scene outliner like it did when I had it all set up in the “MyControler.” And it no longer shows of being activated in the event graph either. All works well for m conroler but once I do it for my character it stops responding all together. I am flustered

also made scale to 1,1,1 in make transform node. Sot that cant be the issue

Hm, I’m noticing the same thing in a top-down project with default MyCharacter. My apologies. I will continue to look into that.

If it was spawning in your MyController, though, we can use the same setup in there with one change: drag off the Target input for the Get Actor Location node, and type “Get Controlled Pawn”. This will target the pawn MyController is controlling, so we can get the appropriate location. 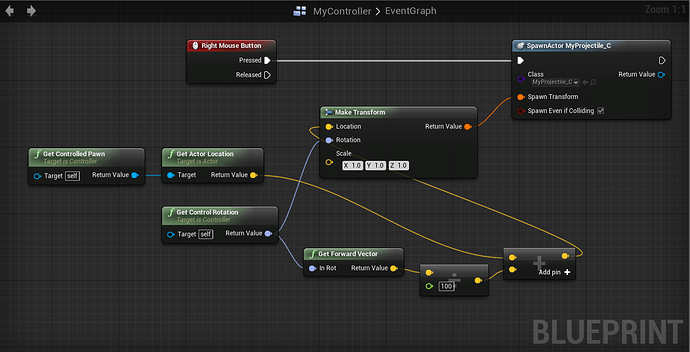 You’ll want to use this node when trying to reference the pawn’s components or settings, as you can’t do them directly from the controller.

You can find a lot of solutions to that at this link:

How can I create top down mouse-driven aiming? (Crosshair follows cursor,...

So I have my top-down character mechanics in place. How would I go about having a 2D crosshair follow the mouse, so that I could fire projectiles in the direction the crosshair is. It's in a top-down perspective, so it's basically a twin-stick...

thank you very much for the help Ben, made things a lot more easy to understand.