Various tools around Unreal, such as UGS, BuildGraph, and Gauntlet, are simpler to use or only work with native projects. A native project is one that an instance of Unreal will recognize as being a part of its directory structure. Conversely, a non-native, or “foreign” project, is a project that sits outside of the Unreal directory structure. This article aims to explain in detail how to set up a Native Project, with clear examples.

Top Level Project Folders
Here’s the top level of an Unreal instance’s directory structure. For this example we’re using a local copy of the //UE4/Main stream from Epic’s Perforce server:

In this example “VanillaProj” is an example project. Its directory structure looks like this:

Another example of a native project would be any project that is discoverable from any paths ( relative to the top level ) listed in UE4Games.uprojectdirs ( highlighted at the bottom of the first image ) : 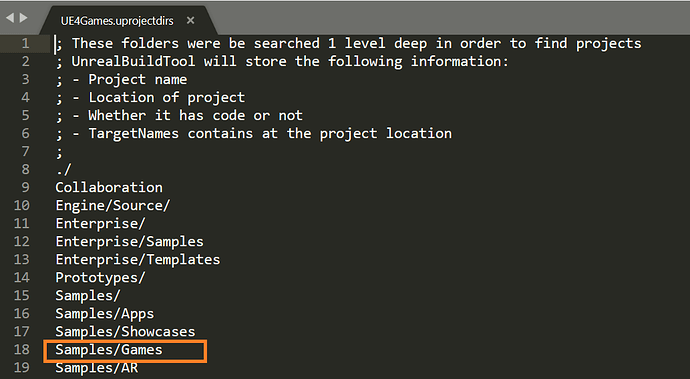 Note: All uprojectdirs files (*.uprojectdirs) at the top level directory will be read for search paths, so you can create your own if you don’t want to use UE4Games.uprojectdirs.

Informative thread, i have a question on the UE4Games.uprojectdirs folder though. are we allowed to write …/ in addition to ./ to get the parent directory of the engine folder included as a native project as well?

There are benefits to using a native project, but having a game repo inside an engine folder with it’s own repo can have disadvantages which if we have the ability to move the project one folder out are largely resolved.