What is the best system config for ue5 performance?

So a multiprocessor will work just like one multicore processor - working in tandem? That is fine then.

Well I got my answer here NVIDIA TITAN RTX is Here

The TITAN RTX NVLink™ bridge connects two TITAN RTX cards together over a 100 GB/s interface. The result is an effective doubling of memory capacity to 48 GB, so that you can train neural networks faster, process even larger datasets, and work with some of the biggest rendering models.

But it is already out of stock and even Quadro is out of the picture because that card costs a whopping $9000 (now Price) which is the budget of my whole system.

I will have to keep looking for a GPU.

edit: At some sites, Titan is getting sold for about $2500. Hopefully, by the time I am going to buy, the price will drop further, as ETH mining is getting stopped in 2022 and Titan supports ray tracing. So it looks more likely I will buy Titan, though I will do some more research in the meantime.

Ok Guys I found this amazing video for how to water cool your computer.

I am posting it here, so anyone who buys such a system can understand how water cooling works if they plan to use it. I had no idea about this and as @ jwatte mentioned, I thought to do some research.

I am most probably not going to use it, it is too messy for my place and with dust that comes into my house, It is never going to work. I need that flexibility to move and turn my cabinet sideways and around to add and remove parts on-demand, dust parts and add things, which will be impossible if custom cooling is added.

It looks nice though and also saves space and removes the CPU and GPU fans. 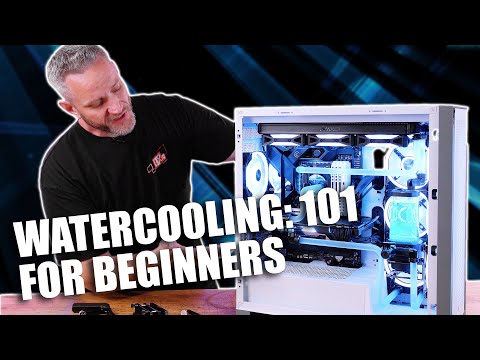 Here are a few of the models you can buy,

You can also buy a liquid-cooled GPU Don’t mix the meaning here “real time” and “rendered”, because you will always have a difference between the real time feedback during the recording and the final rendered pass.
Both context are different and many elements and considerations can influence the setup.

Are you looking for theoretical config or realistic config …
Anyway, the better hardware you can afford will become your reality context.
Also in any case consider that current UE5 have significant drop of performance and final fps compare to UE4. You can easily find post on this forum about this.

So, taking in accompt the current market crysis for pc and components and how deep is your wallet, you will quickly see what you can target as your best config for UE5.

Side notes 1 :
In the Gforce family the 3090 is usually the best recommended for the 24GB which make a huge difference.
Even if is alway welcome, the extra power of the gpu compare to the 3080 is not the real key factor here.

Side notes 2 :
With you new material, If you target is in fact cinematic with UE5, you don’t have to bore to much yourself about LOD.
Take advantage of the new tech with UE5 and separate and prepare each sequences and shots to have the max quality possible per shot during real time record.
Your final result will be processed with the render anyway with all max quality etc…

Most of the tech youtuber have understandable love for water loop.
But is not a god voice and it is not required to have a strong config.
They like to build water cooled more than other config, it is nice looking, nice publicity for them, and fun to do for them too.
Also, consider that most of them have all the tools and right equipment to do so.
It is not the same for a normal civilian who never build a config before.

And lastly, consider also that water cooled config require more maintenance.
“depending of the size of the water loop”

Note :
Where i work they have monster xeon and threadriper with massive ram and so on, it is a pleasure to work with this machine compare to what i am able to by for me

And i can say that no one of this strong computer are water cooled.

I have to create Cinematic animations with UE5. Edit: The aim is to make Hollywood style 3D movies and advertisements, which will run on TV, cinemas, Film Festivals or Netflix. The idea is that, 4k frames can be rendered faster than traditional render farms, using real-time rendering in UE, without bothering about potential performance bottlenecks. Thus more VRAM for handling bigger scenes and textures.

So what should I invest in - Processor with as many cores as possible, probably AMD which has 32 cores (I believe more cores than Intel.

The more of everything is better.

For min requirements you could get away with 8 gigs but in my experience you will be running more than “just” Unreal 5 as aside from that you will have a need to run companion applications at the same time.

In the course of developing a single project you might have a need to also run video editors,sound editors,3d graphic applications like Blender Maya 3ds Max, character development applications like Daz Studio and so on and so on.

Ray tracing is a must and how much vram or cores it should have depends on what applications take advantage of CUDA core technology and the rest depends on how fast you need the work to be done as well stay productive with in the development pipeline.

It should be considered that most applications like UE5 are intentionally designed and targeted to the most common denominator and is left to the end user to determine how to make use of the application or asset, be it a work horse or laptop, so how you set up your pipeline is of more importance than the hardware as to how it needs to function with in that pipeline.

What Epic is good at is providing tools with out end user consideration but figuring out how to be productive with available tools is left to the end user to determine based on their individual and unique requirements so as to “buying” solutions I would say spend as much as you can afford based more on your needs to be productive rather than assume that the cost benefits will scale as to the needs of productivity.

As to the ideals of Cinematic solutions as your end goal the consideration is achieving the render as everything else is disposable once the final result is achieved. To reach that end goal “investments” should be made in areas of productivity and ease of use as to the simple ideal of “Always be working”.

As an example I would consider the purchase to two matched systems, one as the workstation and the other as a render box, so that way anything controlled by the computer can be farmed out to the render box and you can then continue to “work” using the workstation.

Soooo my suggestion is to work smart and as to buying stuff of the shelf go for what you can afford as in most cases the end user tends to max out what they have available.

P.S. More than anything I would consider “storage” high on the list as generated assets adds up fast and more so if considering 4k, or even 8k renderings and today’s terabyte is yesterdays gigabyte.

Thanks for the input. Yes, I agree that using a water-cooled custom build has a lot of Maintenace issues.

So I would go for a system that has kind of 3 fans in the GPU. I find my current r9 390 cools much faster that way and I can move around the workstation, without the chance of any spillage and clean it with a blower.

Maybe if I can find a close loop AO kind of GPU then I can think of buying that. I am already using a cooler master liquid cooler for my CPU. It is actually more of the choice of availability rather than money. It is quite possible I might not find the liquid-cooled GPU at all at my place.

I will never go for a custom cooling loop though.

For min requirements, you could get away with 8 gigs but in my experience, you will be running more than “just” Unreal 5 as aside from that you will have a need to run companion applications at the same time.

For my current system I am using 24 GB which is more than enough for running any 3D software and Unreal. So getting anything below 32 GB will not be an option.

Ray tracing is a must

Yes and I believe 3090 does support ray tracing.

As an example I would consider the purchase to two matched systems, one as the workstation and the other as a render box,

Yes that is the plan, my current system though outdated is still well enough to render Unreal animations, (I will be using it to buy the next system), so I will keep it as a render box or primary workstation (depending on which system I am using at that time to work on or maybe even use both for work and rendering one after the other). When one system is rendering I will use the other to work upon and vice versa.

I believe real-time rendering does not take much time anyways to render the final output.

More than anything I would consider “storage” high

Yes I am working on creating a town now with megascans and the project file is already 200 GB. I have 3 disks 1 tb, 4b, 4tb extended. and I think I might need more space to make unreal cinematics.

Whatever system I can afford, I want it to work for another 11 years like my current system, I might not be needing another system in my life unless I open a small studio and gather more machines. So getting a 32 core or 64 core processor is on my bucket list.

I saw this answer late, and had an additional comment:

For min requirements you could get away with 8 gigs

The “automotive demo scene” (winter) for UE4 did not load on my 64 GB system; it ran out of memory. (I was using about 24 GB for virtual machines doing other things, though – maybe it could have loaded if I removed that…)

The point is: 8 GB is ludicrously too little for anyone who actually wants to make use of the UE5 features. You can’t even use the UE4 features with that little RAM.

For anyone targeting 4k cinematic renders, I’d think 64 GB is an absolute minimum requirement, and I’d think 256 GB could be totally defensible.
Also note that, when your GPU has more RAM, the OS wants to use more regular RAM to match that, for optimal work. It can work with less, but it runs better with more, AFAIK. Thus, sticking a 24 GB VRAM GPU in a 32 GB RAM host system might end up being fairly unbalanced.