I’m in 4.4.3
I know about the open level crash if you don’t remove the UMG widget. thing is, I can’t get it to remove for the life of me. I used Rama’s tutorial that creates a bunch of Child widget buttons for level selection. I tried Get Parent and remove child and remove from viewport. Thing is, is it trying to just remove that one child? I have 5 in my test menu. How do I completely remove all widgets before opening my level? Am I trying to get parent on the wrong widget? I’m getting it on my button widget, which is one of several children on my main scroll box widget.
it looks like everything else works…the is my last hurdle for getting my game going…well the test game anyway.

By the way, all widgets are added from my HUD class. Not sure if that makes any difference on trying to remove them all before opening a level.
Hints?

Little update: I moved my project to 4.5.
Still can’t figure out how to remove the widget with all the child widgets inside it. I can now load the levels from the menu, but not remove it.
Anyone?

I have actually implemented my tutorial of adding child widgets in my In-game UMG Steam Friends List,

and here is how I handle removing child widgets! 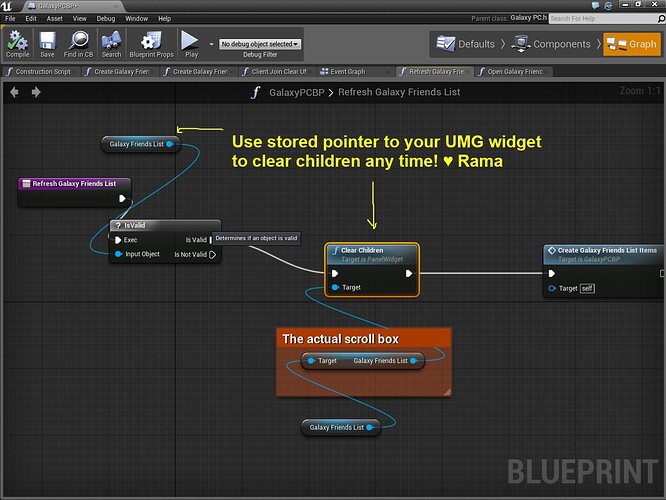 Thanks Rama! However, it did not work for me. I hooked a Print String to my IsValid…turns out, it’s not seeing the Widget as Valid. I’m not sure why.
So, maybe is the location of my function? Should I put this function on the child widget or (currently) in my HUD BP?

Come to think of it, my timer doesn’t get removed either (also called from the HUD BP). Can I not get a valid connection to a Widget class from the HUD class?

Rama! I got it! So, I sat and wondered WHY does your setup work and mine does not? Well, maybe this is a BUG…but I had set up my variables pointing to my widgets by just adding with the +V and selecting the widget name in the list. THIS DID NOT WORK. Instead, I used the “promote to variable” from my create widget…and THAT worked! Not sure why it works that way…is that a bug? Anyway, THANK YOU RAMA! Again, you are my hero!