Good to hear you got it working. I’ll take a look at that rotation test and see if I can find why it’s returning non-zero and a work-around…

Thank you very much for speedy response!

Hey, a few months later and the same behaviour is still happening,
on completely different trees that is.
I was hoping that this would have been fixed in the meantime

If I’m using Planar LODs it’s still creating two MIs, one MI_XYZ_PL and one MI_XYZ_PLTop,
even if I’m telling the plugin that I don’t want to cast shadows.

I’m not quite getting the intention, the textures are packed into the same atlas anyway, why two MIs then?

I know, I can export the mesh and consolidate the materials, but ugh… tedious.

Also, would it be possible to get a baked height map as well?
That would be immensely useful for PDO manipulations.

Hi kaffeekranz - The plane you’re talking about is the “top plane”, it’s not to do with shadows, it’s so the LOD looks good from above.

When you first commented, I was under the impression you were talking about shadow planes.

I should be able to make that work with the same material - I’ll do that soon as I’ve just added a fix for something else and I’ve been testing that.

You can set the 2nd material to the same as the first Planar LOD one - I’m not sure if UE will count that as one drawcall though.

I do have plans for a baked height map but I’m wanting to try and embed it with the current textures so it doesn’t take another one - I’ll see if I have time to make just a separate texture if I can’t embed it within a reasonable time.

Hey, thanks for the quick response!
Yeah, even if I choose the same material it will still count as 2 draw calls, that’s what’s been annoying me.
I would have to export it, consolidate materials externally and then reimport. That’s what I’m doing now… But I’m happy I could communicate my problem!

Regarding the height map, there’s still room in the alpha channel of the MSR texture, or you could even pack it into the normal map’s blue channel.
Ooooor, you could also pack the AO map into a channel, instead of baking it into the Albedo. I always like it when you’re not boxed in and can still choose later on.

I’ve just changed the code to make the top-plane share the same material - if you’re wanting a version that has that in it quickly, email me at rd@recourse.nz and let me know the UE version you’re using and I’ll get a link for you to download.

Hi Everyone, I’m afraid that I’ve just had to increase my prices to reflect the current marketplace conditions and the sharing that is going on.

Please note these are still excellent prices, and support and development is continuing on each product, in fact there is now time for more.

I think the new price is still a good deal for the great functionality and considering how much time it saves.
Also I have been thinking to ask if you was interested in doing a couple of actions considering collisions. To remove and add auto-convex or shape collisions in batch mode for multiple assets? I think tasks like that would complement this plugin very well!

Yes that could be something to add - I’ll take a look at what would be required, it might suit rdMeshTools more though - I’ve added it to the list!

These are the first of 3 products that I’ve built over the last 4 months (designed over a few years). They have been designed to make creating content in levels much easier.

rdBPtools converts actors in your level into Blueprints, in the same way as “Convert Selection to Blueprint” - but with many more options. It can even convert them back to actors in your scene. You can control many aspects of them too - even randomize them.

The products had to achieve a goal I’ve had for a while - they needed to be able to make it possible to populate every room in my game! Each room as a Random Seed which describes the layout - randomized positions and random item showing.

To achieve that goal, it was necessary to build a high-speed c++ randomization system so the rooms could be randomized in realtime. The video below shows that it works well. At the same time a fast Static Mesh Instancing manager was added.

The 3rd product (rdBuildBuddy) is almost ready to release - it contains the parts to make assembling large-scale constructs. It also contains systems to pass through construction information to the parts being constructed so they get to know things like the level, row and column they are on - very useful for constructing things like room number plates.

It also provides a system so each room remembers it’s state - whether lights/lamps are on, radios, tvs, the state of curtains etc - up to 64 states for each room - and those states are savable in your game. 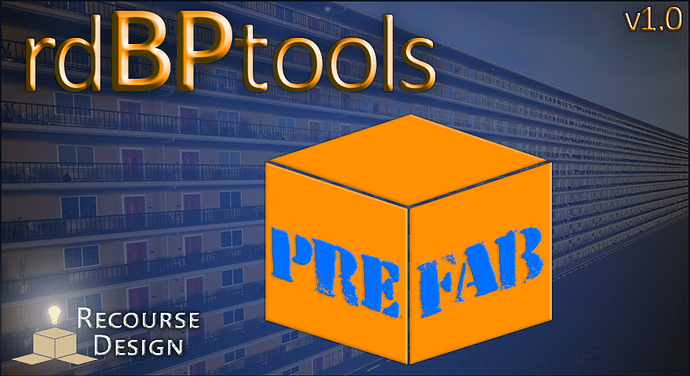 rdBPtools is an editor plugin that makes creating prefab like Blueprints easy and powerful. rdInst is an optimized C++ plugin that takes care of all your Instanced Static Meshes, Spawned Actors, Child Components, Randomization and Selective Hiding/Showing of these objects. I want to use it with 4.27, so if there are UE5 issues with it those would not actually affect me.

I’ve just been finishing off some other products and their documentation, but then it’s back into it - hopefully not too far away now.

Lifesaver comeback, thanks for sharing.

I am really confused by your last three assets, they all seem to do very similar things, but are different plugins with their own pricing, also how do they differ from Prefabricator?

I own your first three plugins, but was curious how rdLod compares or interreacts with Nanite.

Yes I can see it’s a bit confusing - I’m still working on making the marketing a bit more cohesive.

rdBPtools is a much more solid type of prefab creation than prefrabractor - and has many more options and a much more sophisticated randomization system. It also has routines for dynamic hiding/showing of subsections of your prefab and is designed to be fast both in-game and while editing. (It’s also support, there’s not really any sign of support for quite some time). It also supports being child actor in ChildActorComponents.

It doesn’t have the issues that one has - things will only swap/move if you instruct them to, The plugin is editor-only too, so doesn’t need any extra code included when packaging.

Setting up the randomization is also a lot easier - no need for collections, you just set the properties of things right into the actors themselves - they’re saved and migrated as normal, even without the plugin - just right-click an actor, select the menu option, and set the properties in the window.

It also gives you options to turn anything you’ve built back into normal actors, or static meshes. It’s also very easy to use. These Prefabs can be built using the rdInst plugin (or custom ones) for high-speed Instancing.

rdInst is an Instancing/Spawning plugin that handles high speed creation/movement and custom data manipulation. Version 1.1 (which is almost ready) also has Actor Pooling built in. These are fast routines, and the instances are manged for you. The C++ actor that is exposed to blueprint also has functions for fast randomization, spawning from the construction script (managed). This plugin not only makes it easy to work with instances (you just call “AddInstance(mesh,transform)”) but makes it much faster to work with in the Editor, check out these times: 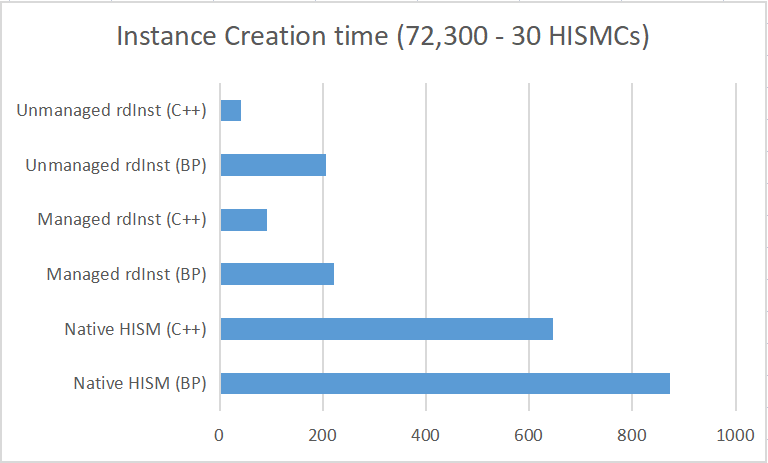 rdBuildBuddy is a set of Components that can be used to create constructs: similar to the spline-based mesh placement systems, but with many types including points, lines, splines and boxes - they have options for scattering, distributing and placing to make walls/pipes/roads. You can spawn StaticMesh Instances, or something that makes this stand out is it can spawn any type of actor - including prefabs made with rdBPtools.

You can have any number of these components on Actors - allowing complex constructs from a few combined components.

When used together, you can take your optimizations even further - you’re able to assimilate all the static mesh instances in all the actors that are used to build things in rdBuildBuddy (when using rdInst) - all those actors become just one actor (taking on their randomization at that time) - that’s one of the things that sets this system apart from others - those assimilated actors provide huge amounts of optimization, both while editing and in game.

These 3 products together are what I’m using in my game to create the content. It’s the only way I’ve been able to have a open world where:

Regarding rdLODtools and Nanite - Nanite is a replacement for LODs, they are mutually exclusive. The types of meshes rdLODtools makes are much better for distance objects though, so when building your levels with Nanite, rdLODtools can still be very useful for creating the objects that only appear in the distance - in fact, after I have finished the Impostor routines, that is what I’ll be concentrating on for the tool.

Perfect, than you very much for the reply, that clears a lot up for me.

Intriguing stuff, hope to try it out, doing an big map with procedural generation using blueprints is too slow, im in fact currently writing my own cpp functions to do some instancing based on splines