Moving wall / cube pushes player in steps and not smoothly, how to fix? [SOLVED]

While that’s not at all a bad idea:
Do it in c++, I couldn’t encourage you more to so so…

I will surely get to C++ eventually, don’t know if I am ready for that yet lol.

What I was saying to do was to trigger the physics effect when touching the moving wall, and subsequently disabling it again based on character position over time.

Say, if 2 or 3 frames pass with the same character location, you know for sure you stopped being pushed. So turn the simulate back off.

I still think something could be or should be able to be done with that kind of approach, physics based or otherwise. Get the location and velocity of the wall, and if the player is overlapping (capsule or mesh) then do something, In what you just described it would be to turn physics on and apply a force when overlapped then turn off when not. Going back to earlier in this thread… if I apply this code below to the third person character.

You will notice on that video that the stepping effect does not happen, but then the player is being pushed along, “offset”? all the time anyway.

Imagine then if that effect happened “just” when TPC overlapped the wall. As pointed out earlier in this thread, the problem is not when player jumps into the moving wall, as collision will cause the capsule to be blocked, and blocked smoothly, the problem then is when player Is Landed and is pushed by the wall, and the inherit shape of the capsule component causes this stepping effect.

Maybe you are over-thingking it too much.

The push and movement should just happen without anything special since you are now setting the capsule component to be able to simulate/react to the environment (That’s the point of toggle simulate physics on/off).

Then you just need some sort of system that brings you back to not simulating.

Maybe you are over-thingking it too much.

For sure, it should be fairly simple I would think.

The push and movement should just happen without anything special since you are now setting the capsule component to be able to simulate/react to the environment (That’s the point of toggle simulate physics on/off).

Then you just need some sort of system that brings you back to not simulating.

And finally…I got it.

The key this time seemed to be a box collision around the player sized accordingly. 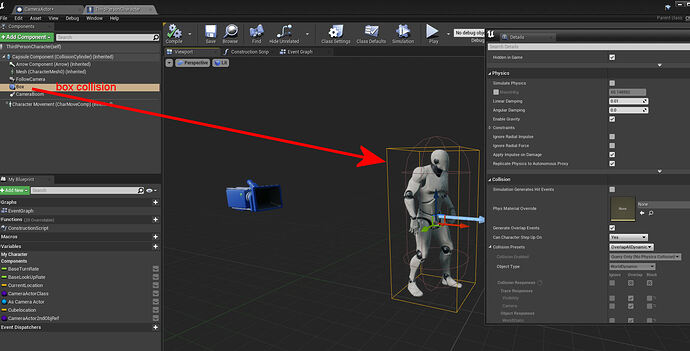 For some reason, it has to be that box to check for in the IsOverlapping or it does not work, I tryed with the CC and it was the same og problem in the OP.

This isn’t actually physics based at all.

Also, you probably don’t need the box. You can detect collisions purely from the pushing box, and implement an interface on the character Or just cause the box to move the character after it detects its a character.

No real need to cast or much else.

The actor position isn’t walled behind a cast.