Is there anyway to get OSC Messages in and out of the engine?

Curious if there is a way to get OSC messages in and out of the engine much like there is in Unity3D. The purpose would be for computer vision tracking and other interactive installation type projects.

I’ve seen things like this before for UE3 but was looking for a more native based solution. Support like this would bring over a lot of people from the hacker friendly Unity.

I have not done this myself as it is beyond my capabilities at the moment, but I would guess from other experience that you could directly implement whatever CV library you wish to use in UE4, perhaps through a blueprint or as middleware.

Same would go for OSC but then why have another layer in-between if it might not be necessary?

Because, we want to control the UE scene from outside the gaming world over network with a osc software like Lemur.

I found under Plugins/Devices the LiveEditor Version1.0.
this looks as there is already some midi/osc functionality implemented, but its experimental and not documented

There is on the developerforum a thread from march14:
https://forums.unrealengine.com/showthread.php?11621-Developerment-in-LiveEditor-plugin-to-MIDI-Protocols

I just published the first version of UE4OSC. It is a free, open-source plugin that allows Unreal Engine 4 to communicate send and receive OSC messages.

It has a page on the Unreal Engine Wiki, and is on GitHub. 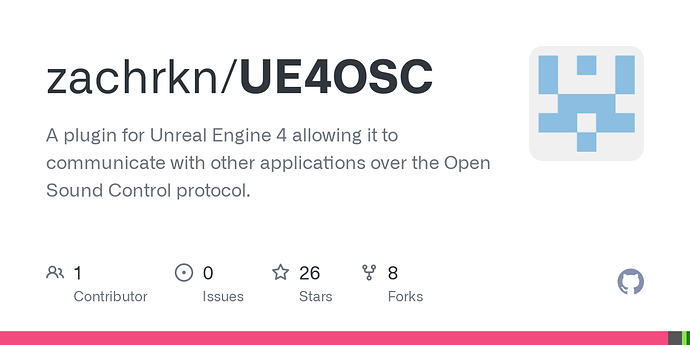 GitHub - zachrkn/UE4OSC: A plugin for Unreal Engine 4 allowing it to...

It is has basic functionality at this point in time, but I will continue to expand it based on my own process and any feature requests I get.

This is great work!

I cannot wait to try this out.

I tried to run ue4osc. It gives me an compability error in 4.4.3 and it asks for recompile. Is there a fix for this without recompiling or what am i doing wrong?
Thanks

Thanks for the bug report! I compiled this [the UE4OSC plugin] in 4.4.3, 64 bit. I’m new to this, so I don’t already have a solution for you, but perhaps we can find one. Can you give more information about the compatibility error you are receiving? Also, are you using a compiled-from-source version of UE4, or the installation version?

I released my OSC plugin here: 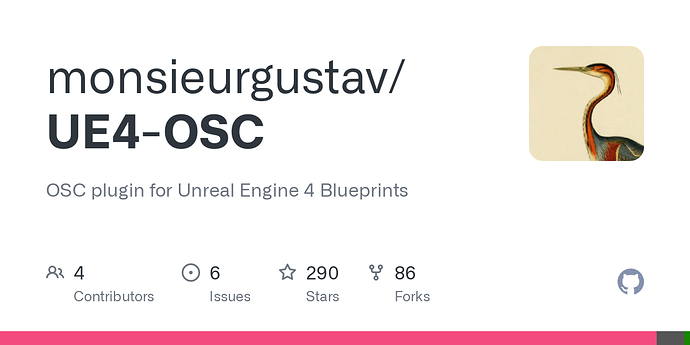 OSC plugin for Unreal Engine 4 Blueprints. Contribute to monsieurgustav/UE4-OSC development by creating an account on GitHub.

It receives and sends OSC messages in Blueprints. It manages float, integer, bool and string parameters.

Right now, you must compile it yourself though…

Hello MonsieurGustav, i am really new to this, i am not able to compile your plugin. Could you please compile it for me to 4.5.1?? That would be a great help. Thanks in advance!

I’m sorry, but I won’t do it because it is a lot of work… and to be honest, unreal engine itself compiles just what is needed to match the need (editor, development, shipping, Windows, MacOS, etc.) very easily.

And that’s it ! You don’t need any programming skill to do it, really.

Also, have a look there :

Hello devs, I came here on behalf of some of my fellow live visual artist developer friends, casually called VJs. We often work in many different programming environments with various tools to try to accomplish our visions whether simple generative... 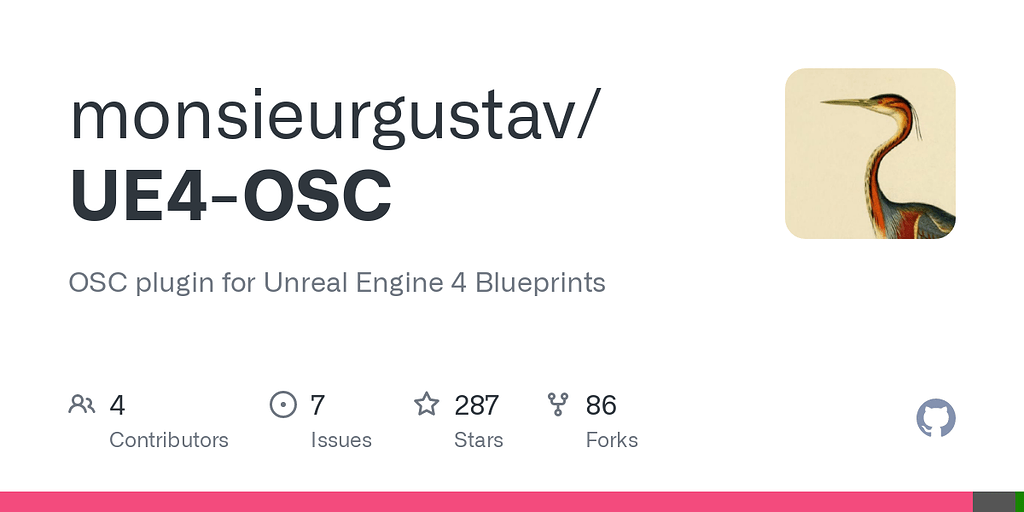 I released my OSC plugin here: It receives and sends OSC messages in Blueprints. It manages any number of float, integer, bool and string parameters. Works in 4.4 and 4.5. Tested on Windows and MacOSX. Follows [Feature Request] OSC, MIDI, and...

Hi Guillaume,
thanks a lot! I got it working and i am very happy!
Thanks again! 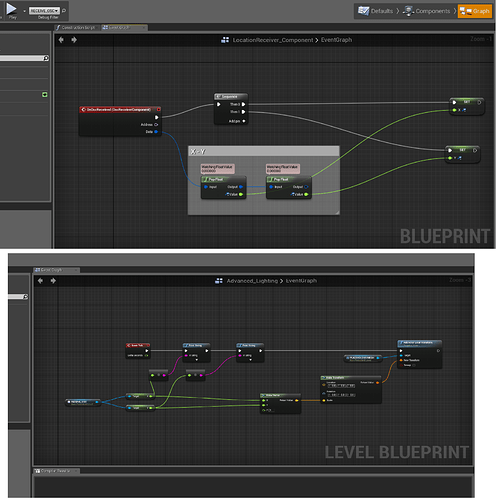 I want to readout two osc values and put them in 2 variables, so i can access them in the levelbp.
At the moment i only set one variable, the other one stays at 0. What am i doing wrong here?
Thanks in advance.

I just tried it at home, using the same graphes as you did, and it works…

Re-check that your OSC message has (at least) 2 parameters.
And look at the blueprint execution…

I have no other idea.

Sorry for the self-promotion, but if you don’t mind using a third party software then you might want to have a look at Lightact.

Also, check out a tutorial on OSC inputs to UE4: