I have some question, tho might be way way in over my head

Jus so you know where Im comming from:

I’m a 66 year Kiwi gamer thats been into Elder Scrolls since Adam was a cowboy and been modding those
games to best of my ablity ever since and have not long back started playing with modeling and texturing
I’m wotking on a wordspace map and came acorss (to you missforturne maybe, gonna need a yard and a hlf of help
<grin>) the UE4 engine and had to take a wee look, that what ya do aye, curiosity. Any how I figured I might be
able to create a wee or not so wee world and dump some assetsin it make it look like an ole darkage/Elder Scrolls ish
type world with a few dungeons abd caves to delve into, big job I know, I got a couple of years, Im retired.

The question is can I build a world that plays like the say Oblivion Skyrim world in game play style where
the player can loot gear change armors, rage with a sword popping in and out of 3rd first person etc?
or is this locked into a standard first person shooter with limited 3rd person if you start a new project.

and as I had trouble writing this message never mind any other lanague I could code if you paid me to,
use to write batch file back in the good ole day of EMM and XMM memory, did try a bit of DBase 3 you
young falla’s might have to google that one that was long time ago.

So two finger typing, lots of time and Youtube, is it worth me give’n it a crack or should I creepback to
the Creation Kit and it’s limits

Sorry if this page is to long for some you, I know a lot of you on forums like it said in two lines, I’m not
that good yet

It can certainly been done, will involve a bunch of reading/learning but hey you have plenty of time =]

Here are some useful links:

Complete resources for learning to use Unreal Engine 4

For a large world like in skyrim you will have to use level streaming and other techniques for open world landscapes -> Level Streaming | Unreal Engine Documentation
To change the view: https://www.youtube.com/watch?v=haA6vYgbEw0
Whenever you have any problems, just post them here into the forum or answerhub -> we are always here to help

While all of this is doable in theory it’s difficult to say whether or not it’s something you would be willing to spend the time and effort to achieve. I don’t want you to take this in any sort of negative way, it’s just that we’re not talking about what’s possible from a technical standpoint here but the lengths you yourself are willing to go. I suggest you read up on a couple of specific points to get a better idea of the kind of work required.

I think you should start looking at Blueprints. There should be plenty of tutorials and examples on how to get started. Do the generic stuff at first and then try to build something that you would want in your game. A very simple loot and inventory system for example (a cube to represent a dead enemy or chest and some kind of text output to show what’s in the players current inventory would do fine). You do this to see if you think you could build the game using Blueprints. If you find that this won’t work for you, you can try doing the same with the C++ approach or you’re going to need someone else to work with.

You should also import your landscape into UE4 and start fleshing out a smaller area. Place trees and vegetation, setup some lighting and effects and so on. Make sure you concentrate on a small area and build on this until you’re satisfied and be honest about that part. Once you’re completely done you can better gauge how long it would take to do this for your entire game world.

Skyrim, what a game! But is it worth reinventing the wheel? Have to say no! But if you must, there are plenty of ready to go medieval kits on the Unity asset Store. They’re all pretty much plug and play, and you can pull these assets into UE4 as well (bit more work as the materials have to be re-done). Then you’ll be able to use Blueprints without having to learn how to program. That said, making a game like Skyrim is a serious commitment because its so multi-disciplinary. Its best to only take this on if you’re full-on passionate about it so that it will drive you for the next 2-4 years!

It can certainly been done, will involve a bunch of reading/learning but hey you have plenty of time =]

Yep and Wiz will pay me a lol

I was reading this quote from a tutorial for getting a world machine world into skyrim so it’s given
me a bit of an idea of scale.

Qoute
Skyrim engine has its own set of units. As you know, exterior worldspaces are com-
posed of cells and each cell is 4096 game units wide.
Since World Machine can’t work with Skyrim’s units, but only meters and kilome-
ters, we need to translate these units in real world measures. So:

Or do I need to reinstall evrything? I just don’t see a way in the Epic interfave to change my projects
storage

I’m a long way from Aotearoa these days =.

Pretty sure by default in UE4 4033x4033 gets you around 4KM x 4KM, but recently I’ve been scaling my landscape down to get a higher resolution (I was using 2017x2017 for each 1KM x 1KM tile).
I haven’t actually used WM/heightmaps that much though so I might be wrong.

I’d play around with a few heightmaps, and also walk around to get a sense of the scale because like the others said these things can take a huge amount of time. I have 24/7 free time and I’ve been with UE4 since it came out and haven’t really got very far with my project (which is an open world RPG style game).

Like Fighter said you’ll want to read up on the level streaming stuff/World Composition tool as well.

Thought It’d be better to kepp all my dumb qwestions in one place easyer to clear up right. 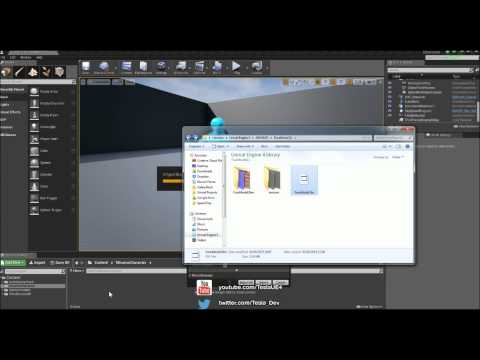 Got to the part where he says to use the dropdown to select the heroTTP skeleton,
I dont have one it seems but he’s talks like it a default standard thats in the engine get startup,

am I thinking wrong?

You have to download the animation starter pack from the marketplace. Then put them into your project and you should be abel to see the heroTTp skeleton

While I’m at it am I right in thinking

Roughness, Height and dispalcment are all one in the same thing when it comes to textures

Roughness, Height and dispalcment are all one in the same thing when it comes to textures

Roughness -> defines where the reflection is
Displacement Mapping -> Is a technique that aims to render bumps as true geometry, in a very fine mesh. Unlike bump mapping, parallax, and relief mapping which tries to “fake” bumps using normal maps, Displacement mapping actually displaces the surface, creating triangles between the texels. .
Height Mapping -> is the same thing, but it’s usually used in the context where a displacement map (also called height map) is applied on a terrain where the value are only used to modify the vertex height.

They are nearly the same

one other thing I noticed when trying out a couple of wee bridges I have as fbx files, they seem to have a (or feels like) large block collision, like a regtangle
around them, I can walk over them. Do I need to do somit to static’s in max before impoting them or should standard FBX format work

There are three ways how you can create a collision -> https://www.youtube.com/watch?v=TTsAYpqHU-c
The standard fbx files should work perfectly